Jessie: In New Hampshire, wondering whether boxing up the mittens could be construed by the weather gods as a dare?

We are spending time this week on the Wickeds celebrating Liz’s latest The Icing on the Corpse. This book includes a ghost-hunting thread which caused me to wonder about other ghost stories in  New England. So Wickeds, is there a well-known spooky story based in your neck of the woods? Do you use paranormal elements in stories of your own? 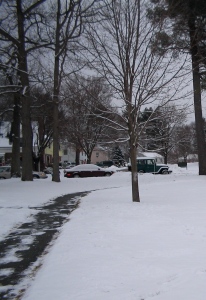 Sherry: When we lived on Hanscom Air Force base our house was just minutes away from the Minute Man National Park. The park includes a pathway where the Colonial militiamen battled the British regulars on the first day of the Revolutionary War on April 19, 1775. Hundreds of men died that day as the militiamen chased the regulars back to Boston. There are always reports of strange lights and noises in the surrounding woods. This was taken from our front porch. The trees you see in the back right of this photo border the pathway.

Edith: This isn’t a well-known story, but I have lived in antique houses since I moved to New England in 1982 (except for five years in a vintage 1960’s ranch, which doesn’t quite qualify). I have often heard unexplained noises at night, although my experiences fell short of actually seeing a lady in white or having lamps fly through the air. Still, it wouldn’t surprise me to know that the spirits of former residents occupied those homes, including my current one (a newbie at 1888). Because I have the kind of imagination capable of seriously scaring myself, I just can’t think about it.

I also don’t tend to read anything with “paranormal” in the description, but I loved Gigi Pandian‘s recent The Accidental Alchemist, about her new gargoyle friend, and also the Low Country Mysteries from Susan M. Boyer, where the protagonist’s dead childhood friend keeps popping up randomly to give her advice.

Liz: I’ve always wanted to meet a ghost. Only a nice one, mind you. But ghosts have always fascinated me. One of my favorite books is Second Glance by Jodi Picoult, which had a ghost hunting theme. I saw her speak and she talked about going on a ghost hunt in an abandoned mental asylum in Rhode Island to do her research. She said she went in a skeptic and came out with a totally different outlook. I’ve never been on a ghost hunt, but I talked to a couple of ghost hunters while I was writing this book and some of the stories are just crazy. Especially the ones about the evil spirits…. 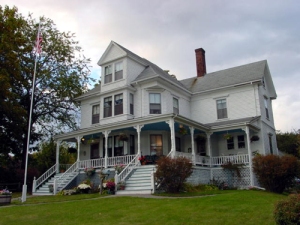 Barb: As many of you know, during the summers, we live in an old sea captain’s house in Maine. My husband’s aunt was convinced one of the bedrooms was haunted. I never believed, until one weekend when Bill and I had to sleep in that bedroom with our cocker spaniel. The poor dog just could not settle. He kept us up all night with his pacing and barking and panting. When we let him out of the room into the hallway, he curled up and went right to sleep. I still think there were squirrels in the walls, or something. But it seemed like an eery coincidence, if that’s what it was.

Jessie: Every now and again I’ll be walking through my house and am sure I see someone going up or down the stairs or along the hall. But just like looking at a distant star, the image disappears when I look at it straight on. I never feel the least frightened of them. I always feel like they are just as at home here as I am. Usually, I wish I could get a better look at but sometimes I think it is more fun for it to remain a little more mysterious.

Julie: I lived in an apartment in Brookline years ago, and we had a poltergeist. My roommate and I both noticed odd things, but brushed them off. Then one day we standing in the living room, discussing dirty dishes loudly, and a can of raid that was on the refrigerator flew in between us. Once we agreed we both saw it, we started to compare notes. Needless to say, it was an interesting year.

Readers, have you experienced any spooky situations in your own life? Or do you prefer your forays into the paranormal to be confined to the pages of a book?