Sherry: Welcome back, Shawn! You have been one busy woman with three books out! Shawn is giving away a book — details at the end of the post!

Shawn: The third book in the Red Carpet Catering series, Murder on a Designer Diet, has just been released. I’m new to being a published author, and I’ve been thinking about how lucky I am. Not only to have been published, writing books that I love to write, but also how different events in my life set me on this particular path.

I’ve admired so many culinary mystery authors for years, and now I get to introduce myself as one to new readers. But I didn’t set out to write culinary mysteries, instead the sub-genre found me. I’ve worked as a cook and as a caterer over my career, but mostly I’ve had office jobs, mainly in sales and marketing. I knew my main character, Penelope Sutherland, would be a chef, but for some reason I still didn’t think of my books as culinary mysteries when I sat down to write them.

Of course, I didn’t think of myself as a culinary expert either, even though I’m a good cook and have a passion for food. I love trying new ingredients, and I rarely follow recipes, preferring to get the general idea of a dish and then putting my own spin on it. I enjoy making dinner for my family, working with simple, healthy, local ingredients. I grow a vegetable garden every year and look forward to all the tomatoes, peppers and herbs bursting into full bloom so I can incorporate them into our meals. So there’s no question I have a passion for all things culinary, but I still hadn’t made the connection to my writing. 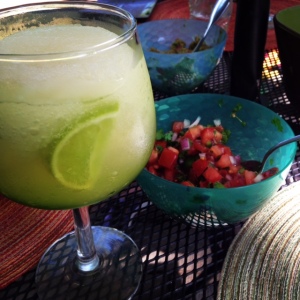 My first year of college, I convinced the manager of one of the nicer restaurants near campus to give me a job, even though I had no previous restaurant experience. I was just 18, too young to serve alcohol, so they gave me a spot in the kitchen. My first position was on the salad station, where all the new cooks started. It was pretty safe, you can’t mess up a salad unless you really work hard at it. Shortly afterwards I moved up to cooking on the line, and eventually I took my turn as kitchen lead, calling out orders to the rest of the cooks and running the service window, making entrees, working the grill and sending food out to the wait staff. I was the only girl in the back of the house the entire time I worked in that kitchen.

In the beginning, I was looked on doubtfully (or flat-out ignored) by the male cooks. They had doubts I would stay or if I did, be able to pull my weight. But eventually I won them over and we had a great time most nights, even when we were so in the weeds we couldn’t stop to talk for a minute. I loved that first culinary experience, even though the kitchen was hot and the hours were long and ran late into the night. The restaurant was also a popular bar, and we served a limited menu well past midnight. But the food was good and on the weekends there was live music, so it wasn’t the worst place to spend a Friday or Saturday night.

When I sat down to write my first book, which would eventually become Murder on a Silver Platter, I thought I was writing a book about the movies, told from an insider’s view behind the scenes. It was my unique take on the film making business, and it was something I hadn’t read before. It (very) slowly dawned on me that while I was writing that kind of story, I also had a culinary mystery on my hands. When all of that was revealed to me, I was so happy I had found a way to merge two of my greatest passions: cooking and movies!

Just like I’d become an accidental, learn-on-the-job chef, I became an accidental culinary mystery writer. It wasn’t the plan when I first started out, but I couldn’t be happier it’s where I ended up.

Readers: How about you all? Can you remember a time when you came to a fork in the road that set you on a path you hadn’t anticipated?

Giveaway! One lucky responder will get a signed paperback copy of Murder on a Designer Diet!

Shawn Reilly Simmons is the author of the Red Carpet Catering mysteries published by Henery Press. Murder on a Designer Diet, the third in the series, released on June 7, 2016.