Thankful for our Readers Giveaway: Guest Sharon Farrow is here celebrating the release of her latest Berry Basket Mystery, Blackbird Burial. She’s giving away a copy to one lucky commenter below.

I love autumn so much that I chose to be born on Halloween, although my parents insist on taking full credit for this. And I don’t think there is a single thing I don’t like about the season, other than it leads directly into winter. Even that prospect can’t curb my delight in the blazing foliage, cider mill visits, and gently cooling temperatures. After many years spent savoring the delights of fall, I’ve realized my favorite season has life lessons to impart about letting go and embracing change. These lessons can also be applied to writing, especially the writing of a mystery series. So here are a few helpful tips inspired by autumn.

Keeping things fresh, colorful and interesting in a series is crucial. This can be especially true for a cozy mystery. Unlike a hardboiled detective series or police procedural, the drama in a cozy never turns too dark or lurid. At the same time, there must be enough suspense and surprise to keep the reader coming back. Yes, a crime will be committed in each book, but that should only surprise the main character, not the reader. After all, this is a mystery. In a cozy, local color is literally built into the genre, which is marked by quirky characters, unusual shops, and regional idiosyncrasies. However, eccentric postmasters and pumpkin carving contests can’t be the sole source of local color.

Regular characters should reveal new facets as the series goes along. After several books, the reader may think they know all about the village shopkeeper or small town baker. But what if the story showed that one of them has been dogged by a crippling phobia or a family past they’re ashamed of. As a recent example, the character of Mary Morstan on the PBS series Sherlock was presented to the viewer as the no nonsense, likable nurse who captured Dr. Watson’s heart. Only later in the series do we learn that Mary worked as an assassin for the CIA. That revelation changed everything for the other characters and future storylines. We all enjoy watching the changing leaves of fall. It can be just as satisfying to see a fictional character reveal their true colors. 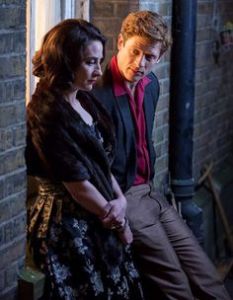 Cozy mystery heroines are often romantically involved with someone in the town. Expectations are that things between the fictional couple will grow stronger, sometimes leading to marriage. But going down such a well traveled path may not be the most creative choice. Just as readers expect a wedding to be imminent, the romantic interest could show himself to be someone the heroine has been mistaken about. Cooling a romance down – or ending it altogether – reminds the reader that life in a small town is complicated. And not only because dead bodies keep turning up. In the mystery series Grantchester, the romance between Sidney Chambers and Amanda provides just as much uncertainty as the crimes that need solving in the village. Although I doubt I was the only one who felt relieved when Amanda finally made her exit.

Cooling things down isn’t confined to romance. An unpleasant character in the series may not be as nasty as everyone believes. If romances in a series can come to an end, so, too, can enmities and small town feuds. A future plot may depend on former enemies joining forces, even becoming friends. While strong emotions, such as love and hate, are fodder for high drama, high drama isn’t always what’s necessary. Now and again, cool off the more intense relationships in a series. Like the first crisp breezes of autumn, it provides a welcome breath of fresh air after a hot, steamy summer.

As sad as it is to see those colorful leaves fall, all good things come to an end . . . at least for a little while. Shedding their leaves allows trees to conserve energy and survive the long cold winter. The leaves served their purpose and it’s time to begin again the following spring. An author needs to look at the elements in their series which need rethinking. Maybe three books was ample time to explore the troubled relationship the heroine might have with a sibling. Resolve the problem in order to make room for future conflicts, preferably with a different character. Perhaps the main character has dealt with financial insecurity since the beginning of the series. Such a subplot can provide interesting conflicts and opportunity for growth. But how much time and space does that issue deserve in a long running series?

There are only so many pages in each mystery, and the crime rightly takes center stage. Subplots and characters that provided energy and interest earlier in the series may run out of steam. Pull out your literary rake and remove the dead weight. And don’t let the bare branches of the next book scare you. Look closer and you’ll see the buds of new subplots, new crises, and new characters. Autumn goes out in a blaze of glory, but always with the promise of rebirth a few months later. 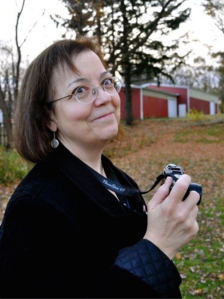 Sharon Farrow is the latest pen name of award winning author Sharon Pisacreta. Born and raised in Detroit, Michigan, Sharon has been a freelance writer since her twenties. Published in mystery, fantasy, and romance, Sharon currently writes The Berry Basket cozy mystery series, which debuted in 2016 with Dying for Strawberries. She is also one half of the writing team D.E. Ireland, who co-author the Agatha nominated Eliza Doolittle and Henry Higgins mysteries. Visit Sharon at sharonfarrowauthor.com, on Facebook @SharonFarrowAuthor, or Twitter @SharonFarrowBB.

Readers: Are you a fall lover or a fall hater? Is it a season of death and dessication for you or an energizing season of renewal. Leave a comment for a chance to win a copy of Sharon’s new release, Blackbird Burial.