Barb here. I’m so happy to welcome Friend of the Wickeds Vicki Fee to the blog today.

Vickie will give away a signed paperback copy of Til Death Do Us Party to one lucky commenter here. 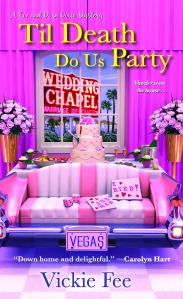 The next entry in Vickie Fee’s Liv & Di in Dixie cozy mystery series, TIL DEATH DO US PARTY (with the electric pink cover), comes out March 27. The Dixie gang travels to Las Vegas for Mama and Earl’s rockin’ Elvis-themed wedding, while Liv juggles a bachelorette party for Mama and a problem-plagued soirée back home. Mama and Earl’s happily-ever-after seems like a sure thing, but all bets (and nuptials) are off when they get to the Burning Love Wedding Chapel. Their Elvis-impersonating minister has left the building…permanently. And worse, Liv’s cousin, Little Junior, is suspected of his murder. With Mama’s happy ending on the table and Little Junior about to lose it all, the stakes are higher than ever. Liv and Di must hit the Strip to find the real killer before he finally plays his ace…

WHEN DID I BECOME A WRITER?

When people ask how I became a novelist, I usually tell them I worked many years as a newspaper reporter and finally decided I wanted to write my own stories instead of other people’s—and that editors take a dim view of reporters who make up stuff. This is true, but only part of the story. My writing roots go much deeper.

I was the kid who couldn’t wait to write about my summer vacation. While most of my classmates seemed to dread these little writing exercises, I relished them. Not that my summer vacations were all that exciting, but I knew I could make them sound exciting if I just found the right words. By the third grade, I was nerdily reading my way through the 10-inch-thick unabridged dictionary at our house. I started this self-imposed project because I was deadly serious about the school spelling bee. But I soon became much more interested in the meanings and sounds of words than their spelling.

In the fourth grade I won a national essay contest in my age group, which garnered me a congrats over the school public address system, a box of candy from my principal and an appearance on a local TV news show. Not only that, but they gave me a huge pile of cash (a $25 savings bond). My writing career was assured at that moment. However, I spent a few decades writing for school and then writing for newspapers before I broke into fiction.

The mystery writer seed was also planted early on, even if it bloomed late. By age 12 I had moved from Nancy Drew to Agatha Christie. I loved trying to unravel the whodunit. I loved the setting. But more than anything I loved the characters, especially Miss Marple. I daydreamed that Miss Marple was my great aunt with whom I spent summers in St. Mary Mead, having tea, untangling her yarn and—most importantly—helping her solve murders. As years passed, I read voraciously and explored many genres, but my first love remained traditional mysteries. And if I didn’t like the way a novel ended, or thought the author didn’t resolve a subplot the way the she should, I would rewrite it in my head. I believe this is when I became a mystery writer, although I didn’t know it at the time.

I’m now a certified (or certifiable) mystery writer, with three books published and a fourth set to release in a few days. From this side of things, I understand better how my favorite authors sometimes went off course with a subplot or an ending. Writing a novel that weaves together an intriguing plot and compelling characters isn’t easy. I don’t claim to have mastered the mystery, but those rare, precious moments when things come together and I feel like I’m getting it right are glorious. Still, at some point in every manuscript so far there has come a moment when I’ve asked myself, “Why did I ever think I was smart enough to be a mystery writer?” But when one big piece of the puzzle finally falls into place, I think, “I’m brilliant! I’ve just figured out my own mystery.” The one that I made up myself.

Readers: Was there a moment when you knew (at the time or in retrospect) that you would become a writer, or teacher, or doctor or…? Comment or simply say hi to be entered to win Til Death Do Us Party. (Love the title.)

Vickie Fee, the highly-caffeinated author of the LIV & DI IN DIXIE mystery series, was born and raised in Memphis, where Elvis and BBQ are king. She worked many years as a newspaper reporter in small Southern towns populated with colorful characters, much like those in the fictional town of Dixie. She now lives in Marquette, Michigan with a peek-through view of Lake Superior and a longsuffering husband. Catch up with Vickie (www.vickiefee.com) on Facebook (https://www.facebook.com/VickieFeeAuthor), Twitter (@vickiefeeauthor), or on the mystery blog (www.chicksonthecase.com).