Liz here, again. We’re winding up A Biscuit, A Casket‘s launch week, and today we’re talking farms. In the book, Stan winds up spending a little more time than she ever thought she would on the dairy farm in town. We thought it might be fun to tell our own farm stories. Which I didn’t really have until I started writing this book.

I’m a city girl. I like high heels and coffee. I don’t like work boots and muck. And 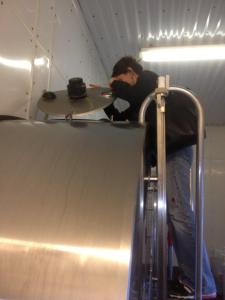 worse. I do remember accompanying my mother once as a kid to a local farm to get manure for her garden. The stench remained with me most of the day. When Stan’s next adventure became clear, I knew I needed to get the farm thing down. So I went on a tour of the local dairy farm. I met the cows, I stepped in muck, I even got to check out the milking tank. We didn’t tour the manure pit, thank goodness. Stan seemed to get used to the farming thing. Me? I’m good. Get me to Starbucks, stat.

Julie: When I was in college, my friend Jo-Ann’s family owned a dairy farm in Maine. First of all, I never understood real darkness until I went to visit her family for the weekend. No ambient light meant when you wake up on a moonless night, it is dark. “Darker than the inside of a cow,” Jo-Ann would say.

We went to visit during calving season. That meant three things. First, mud. Happily, my father had bought me a pair of green boots with yellow laces that were up to the task.

I had had little use for them at school, but brought them with me. And I earned big points with Jo-Ann’s father for having them.

The second thing it meant was seeing pregnant cows. Yeesh. That is a sight for a city girl, let me tell you.

And the third thing? Brand new calves. We walked out and saw a calf literally minutes old. At the same time, the hay truck came out, so the new mother got up, left the baby, and went for a nosh. I was a wreck, waving my arms, keeping my distance from baby but convinced that s/he was doomed. S/he got up, and mama came back. And Jo-Ann’s father told the story for years, about the city slicker who was waving her arms in the middle of the field.

Edith: Great stories! In ‘Til Dirt Do Us Part (out May 27!), farmer Cam gets rescue

chickens. I wasn’t really that familiar with chickens, since there were no animals except cats on my own farm. But my son JD was working on a local farm with chickens last summer, so I stopped by for a visit. And they are the funniest things! They make a gargling sound – none of the “bok-bok” you hear people make in imitation. They have personalities. Some are way smarter than others. I had a ball visiting them several times and asking my several farmer friends for their hen stories. I even met an attack rooster in Maine called Ruffles, who I just had to incorporate into Farmed and Dangerous!

Barb: My family used to endlessly tell the story of little me the first time I saw a cow. It was grazing on a median strip on a highway and my question was (allegedly), “Who winds it up?” I have no memory of this and I think the story is apocryphal. My Great Aunt Elsie and Uncle Pierre had a sheep farm in New Jersey and we spent every Easter there until I was about ten. Here’s what I remember: sheep are dumb. And finally, chickens. At sleep-away camp it was my job to put the chickens to bed. It was an awful job. I’d get half of them in the coop, then round up the other half, open the coop door and the first group would run back out. The expression shouldn’t be “herding cats.” It should be “herding chickens.” If you’re getting the impression I won’t be moving to a farm anytime soon, you’re on the right track.

Jessie: I have a summer camp farm experience too. The summer between fourth and fifth grade my parents sent me to camp for a week for the first time. The owners of the camp had six children of their own. They also had an enormous vegetable garden and a whole slew of farm animals to help feed their family. Because of this all “fun” activities at the camp revolved around farm labor. I remember feeding ducks before breakfast and spending the afternoons weeding the garden and lugging buckets of vegetables to the back of a truck. Needless to say, my parents sent me to a different camp the next year.

Sherry: My husband lived on a farm in Idaho for five years during junior high and high school. Another farmer gave his family a good deal on a calf every year in the spring. The calves would stay with the other farmer to be fatten and sold the next fall. One year a calf pulled a fast one on them by getting pneumonia. So Bob’s family brought the calf home to nurse her back to health and named her Buffy. Buffy liked Bob and followed him around nudging him with her head when she wanted attention. One day as he worked, he ignored her. She didn’t like being ignored. Bob bent over to pick something up and Buffy butted him right in the rear end. He went flying, found himself flat on his face in the dirt, and mad as the dickens at Buffy.