Jessie: Today we are delighted to be joined by the talented and prolific Kathy Lynn Emerson and her alter ego Kaitlynn Dunnett. Kathy knows a thing or two about writing mysteries and about New England weather. Welcome Kathy!

The Scottie Barked at Midnight is the third novel I’ve begun with an
accident on an icy or rainy Maine road in the month of March. Odd, you say? Not if you’ve ever visited Maine at that time of year. At its best, it’s mud season. At its worst, there is glare ice under the tires.

The first time was in my first published novel. Aimed at readers age eight to twelve, The Mystery of Hilliard’s Castle (1985) starts with the words “It was March and drizzling.” Everything the heroine can see is brown and dingy. There are still patches of snow in the fields and the road is slick. Then another car runs into them.

Next up came Cloud Castles (1989), my first published novel for grown ups. A romance in the Silhouette Intimate Moments imprint, it begins thus: “Rain spattered against the windshield in immense dripping blobs.” The heroine is on a desolate rural road in western Maine. A little later, when she tries to stop to avoid another vehicle, the car hydroplanes and she ends up facing back the way she came. When she passes out from a bump on the head, the other car disappears, making the story she gives the hunky deputy sheriff who rescues her seem highly suspect. Hey—it is a romance. Actually, it’s romantic suspense or, to use the old-fashioned term, “woman in jeopardy.”

After that, I stayed off slick Maine back roads, both in my writing and 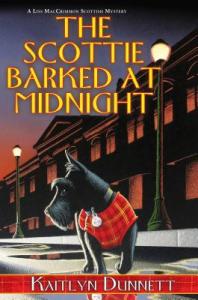 in real life, for a good many years, but in The Scottie Barked at Midnight (2015) there was just no other place to start. Here’s how Liss MacCrimmon’s latest adventure begins:

Liss Ruskin peered through her windshield into what could only be described as “a dark and stormy night.” She knew that phrase was a cliché but there were times when a few overused and hackneyed words did a better job of summing things up than a whole paragraph of metaphor and simile-laden description. This was one of them.

It’s not just raining, it’s sleeting. Liss is chugging along a “winding two-lane road at a snail’s pace, eyes peeled for glare ice on the pavement.” Her tires keep losing traction on the slick surface and she narrowly misses sliding sideways into a ditch. She’s relieved to make it safely down a long, steep hill, but she breathes a sigh of relief too soon.

It was at that instant that something darted out of the trees and ran right in front of Liss’s car. Despite everything she’d been taught about winter driving, Liss braked hard and turned the wheel, the desire to avoid killing a defenseless animal proving stronger than her sense of self-preservation.

The next seconds seemed to last an eternity. One tire hit a patch of black ice. The car slued toward the side of the road. Liss felt a small bump and hoped it was only the car going over the ridge of dirty, hard-packed snow left behind by a winter’s worth of plowing. Then an enormous tree loomed up out of nowhere. Sure she was about to slam head on into its massive trunk, Liss let go of the steering wheel, squeezed her eyes tightly shut, and covered her face with her arms.

Of course, since Liss is our heroine, you know she’s going to survive. But what about the animal she swerved to avoid? As soon as she stops shaking, she gets out of the car to look for it, and that’s where the Scottie of the title comes into the story.

Some people think it’s trite to start a book with the weather. Others say it’s taboo. As Liss does, I admit it’s a bit of a cliché, but when you live in Maine, the weather is more than just something you talk about. Come visit us in March and you’ll see what I mean.

Kathy Lynn Emerson/Kaitlyn Dunnett is the author of over fifty books written under several names. She won the Agatha Award in 2008 for best mystery nonfiction for How to Write Killer Historical Mysteries and was an Agatha Award finalist in 2014 in the best mystery short story category for “The Blessing Witch.” Currently she writes the contemporary Liss MacCrimmon Mysteries (The Scottie Barked at Midnight) as Kaitlyn and the historical Mistress Jaffrey Mysteries as Kathy (Murder in the Merchant’s Hall). The latter series is a spin-off from her earlier “Face Down” series and is set in Elizabethan England. Her websites are www.KathyLynnEmerson.com and www.KaitlynDunnett.com