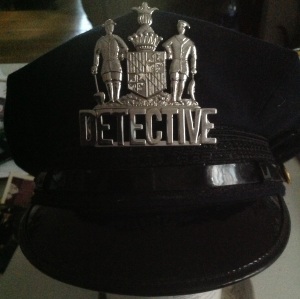 February is a month many people think about hearts and love. Love isn’t always easy to find and a lot of us take for granted the love we receive. I think this may be especially true when it concerns family. I was raised in my grandparents home. Well, really it was Nana’s house, she allowed Pop-Pop to live there and wouldn’t let my father leave. I’m not complaining, I had a wonderful and happy childhood. I lived with four people who watched my every move more closely than Kennedy was watching Cuba. 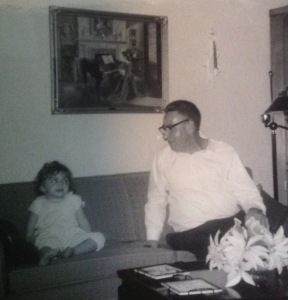 The most vigilant of the group was Pop-Pop. There was not one thing I did that he wasn’t at my side. I think he would have gone to school with me had Sister Angela Marie allowed him.

Pop-Pop had never had any small children of his own. He’d married Nana when my dad was seven years old. When I was born I was treated in the same manner as a porcelain doll and Pop-Pop made it his main mission in life to see I didn’t get broken.

Of course I did several times which only increased his anxiety and watchfulness of me. “Landing in Normandy was easier,”

Pop-Pop would say under his breath as Nana gave him instructions as to what I was and was not to do while we were out of the house. We were going to run a few errands for her on Light Street. I was still in an arm cast and sling from my most recent operation so there were even more rules than usual. No skipping, hopping, running, jumping or swinging my arm around. Watch where I was going. Hold Pop-Pop’s hand. Stand up straight, don’t bump into anything. The list went on.

We never made it to Light Street. Pop-Pop stopped at the corner to visit his pal Mr. Palmer who owned the tavern a block away. They watched the ball game and drank a beer while I sat spinning on the stool eating a pretzel stick and drinking a Coke. Three spins in and I went flying off the stool. Who knew Pop-Pop could move so fast? He caught me in one hand while holding his beer in the other, never spilling a drop.

He was my best friend, my first friend. He took me to my first burlesque show, my first bar and a funeral parlor everyday after school to visit his friend who was the mortician. He tried to teach me to play guitar and I learned to sing every song he knew. We played poker, rummy, dominoes and any other game that I could play while sitting down to limit my chances of injury. Pop-Pop sat with me at Children’s Hospital on more than one night and when I was in middle school he watched all my soap operas and gave me a complete rundown in the afternoon when I came home. He was there everyday and I could no more shake him off than I could my own shadow.

When I was twelve he died of cancer. It was near the end of February and neither my sister nor I had been told he was sick. I wasn’t allowed to see him at the same funeral parlor where we had spent so many afternoons together. It was the greatest loss of my life.

The day of the funeral I stayed home with my cousin. We made the coffee and put out the luncheon meats and pastries. After nearly everyone had gone home I overheard one of my aunties tell Nana she had lost her best friend. It was the only time I’d ever seen my grandmother cry.

When my son was born there was only one name I would consider for him. His name is Louis, in honor of my grandfather. I have told him every story I can remember about Pop-Pop. I think how proud Pop-Pop would be to have a child named for him and how I wish he could have lived to see my beautiful boy. I’ve done my best to teach him all the things my grandfather taught me. Louis can play rummy and poker, he knows how to sit at the bar and drink Cokes and eat pretzel sticks and can sing all the words to Won’t You Come Home Bill Bailey. We’ve hung around a funeral home or two, but have yet to take in a burlesque show. Maybe when he’s twenty one.

If we are lucky, some wonderful person will enhance our life. If we are smart, we will acknowledge their gift.

Readers: Who made the strongest impression on your childhood?

Kimberly Kurth Gray is the 2009 winner of the William F. Deeck/ Malice Domestic grant for unpublished writers and a Hruska Fellowship finalist as well as a Wellstone Emerging Writer Fellowship winner. In addition to blogging, she is the author of several short stories, the latest Tidings of Comfort and Joyce can be found in the second Mindful Writers anthology, Over the River and Through the Woods., View all posts by Kimberly Kurth Gray