I’ve thought a lot about themes in cozies and what part they play in a book. I’m making a late addition to the post — in this case when I say theme I’m talking about what could also be called the hook of the series and sometimes the occupation of the character.  I realized that theme should be like a character. Before you throw your hands up and think, “The people who think setting is a character are nuts, so this girl has gone completely crazy”, bear with me.

What does a character do in a story? If it’s the protagonist they drive the story, if it’s a minor character they help move the story along, the antagonist impedes the story. Revelations come about and the protagonist’s personality comes through her interactions with the other characters. Is she kind, cranky, suspicious? How she interacts with the theme also reveals character to us.

In my books Sarah goes to and organizes yard sales. She meets lots of different types of people and we find out she’s kind, but stands up for herself. She’s thoughtful but spontaneous. The theme lets us see she loves a bargain, she’s clever, and after a difficult divorce in book one, resourceful. It’s a good way to use that old adage, show versus tell. 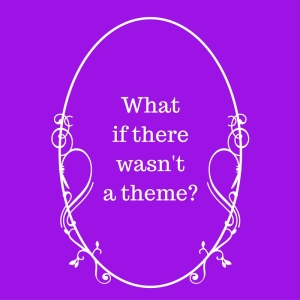 Characters and their voice is what makes us fall in love with a book, it’s what makes us stay with a series, it’s why we root, or get mad, or cry, or laugh. A well integrated theme will do all of those things too. It’s a hook but if it’s done right it’s such an integral part of the the story that it doesn’t stand out as theme but blends as character. It should be important enough to the story that if it was gone, it would feel like a character died. The reader would miss it.

So far Sarah has gone to yard sales, set up New England’s largest yard sale, organized a February Blues yard sale on an Air Force base, and organized smaller yard sales for clients. In All Murders Final she starts a virtual yard sale. Each one of these types of yard sales plays out in a different way. Like a character who is difficult as opposed to one who is overly helpful.

As with any character you have to make sure not to go over the top with your theme. I’ve had a lot of people ask me if Sarah finds clues at the yard sales she goes to. So far the answer has been no — for two reasons. First, it would be a huge coincidence if Sarah did find a clue at a yard sale she went to. Writers have to be very careful with coincidence or readers wouldn’t find the story plausible. Sarah did overhear a conversation at a yard sale in Tagged for Death, but without other things happening the conversation wouldn’t have been important. Second, I want to make things hard for Sarah, just like when she questions someones and they lie or just don’t answer. A yard sale that yields too much would make her life too easy. Some day Sarah might find a clue at a sale but it will have to be carefully integrated.

So readers what do you think? Do you have a favorite theme?