by Barb, suffering the 75 degree temps in Key West

Please welcome Friend of the Wickeds (FOW), Carol Perry, author of the Witch City Mystery series from Kensington. Today is release day for her latest, Murder Go Round! Congratulations, Carol –and take it away! 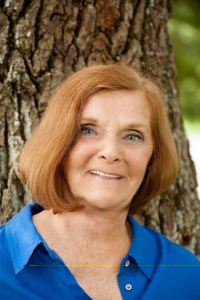 Thanks for sharing my special book birthday for Murder Go Round! It’s the fourth book in the Witch City Mystery series where all the action takes place in Salem, Massachusetts—the magical city of my birth. (Born there on Halloween eve, as a matter of fact.) In this one, my crime solving couple, Lee Barrett and Pete Mondello, along with Lee’s Aunt Ibby and O’Ryan the cat, get involved with murder (of course,) involving an old carousel horse, a silver Russian samovar and the late Tsar Nicolas II.

Quite serendipitously, I received an invitation to serve on a panel of mystery writers at the upcoming MWA Sleuthfest next month in Boca Raton, Florida. The assigned topic: “Crime Solving Couples.” I immediately began thinking, remembering, reminiscing about all those wonderful detecting duos I’ve enjoyed over the years in books, TV, movies, and yes, even radio. 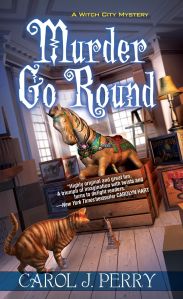 At first, the couples that came to mind were the married, or at least romantically involved, men and women who worked—sometimes in beautiful harmony, sometimes from opposite starting points– to bring the baddies to justice. Think Dashiell Hammett’s Nick and Nora Charles; Richard and Frances Lockridge’s Pam and Jerry North; Sidney Sheldon’s Jonathan and Jennifer Hart; and more recently, Kathy Reichs’ Dr. Temperance (Bones) Brennen and Seeley Booth; Anne Perry’s Charlotte and Thomas Pitt; Dennis Lehane’s Kenzie and Gennaro.

I began asking friends and family, fellow writers, strangers I met in line at Barnes & Noble—“Who’s your favorite crime solving couple?” Everybody has one—usually more than one—most often, a lot more than one! I found myself saying “Oh, yeah. That one! Me too. Loved it!” The list grew. Carolyn Hart’s Annie and Max Darling, Agatha Christie’s Tommy and Tuppence Beresford: Rhys Bowen’s Molly Murphy and Dan Sullivan; Margaret Maron’s Judge Deborah Knott and Deputy Dwight Bryant. The titles kept on coming. Some of the stories take place in the past, some in the present, a few in the future. It seems that there’s no end to the possibilities we writers have in creating couples who solve crimes.

My heroine, Lee happens to be a scryer. (She sees images, often unwelcome ones, in reflective surfaces.) Pete, the man in her life, is a straight-arrow, just-the-facts-ma’am police detective who isn’t comfortable with things paranormal. Throw in her cat, O’Ryan, who used to be a witch’s “familiar” and poor Pete is surrounded by high strangeness. So Pete and Lee approach problems–like murder–from different angles. (Liz’s Stan and Jake seem to work that way too, as do Barb’s Chris and Julia.)

Not all of the couples who fit into this category are of the one man, one woman variety. Think of Holmes and Watson, Batman and Robin, Cagney and Lacey, Carolyn Haines’ Sarah Booth Delaney and Tinkie Richmond, Martha Grimes’ Richard Jury and Melrose Plant– and I’m so looking forward to Jessie’s Beryl and Edwina series!

The more I’ve thought about this, the more possibilities for mystery plots have suggested themselves. Some men and women solve crimes together, but never quite reach “couple” status, even though there’s sexual tension throughout the adventures. Think Scully and Mulder in “The X Files,” Maddie and David in “Moonlighting”

What a rich field of ideas for writers! Couples can combine their varied methods of mystery-solving as Pete and Lee do in Murder Go Round. In the Bones stories, Temperance approaches the problem from a scientific angle while Booth sticks to legal procedure. Combining two personalities for crime solving offers a neat kind of a BOGO for writers. Maron’s Judge Deborah must try not to get involved with Deputy Dwight’s investigations which might wind up in her courtroom. We get to double the tension of the story as each of the pair has his/her own “moments of danger.” Banter between the two, whether loving, scary or amusing, helps to advance the plot and develop the characters.

Wickeds, fellow writers and readers, who are your favorite crime solving couples? I’m envisioning a mile high pile of sleuthing duo books to add to my TBR collection.