Edith here, happy to host my friend Leslie Karst again. And she’s giving away a copy of

her brand-new book to one commenter here today. I loved the first book in the series and am delighted my copy popped up on my Kindle this morning. Check out this starred review from Publishers Weekly (it’s no mean feat to score stars from them):

“Engaging characters, terrific writing, and a savory blend of musical and culinary erudition…polymath Karst sauces her plot without masking its flavor. And she’s a dab hand with the red herrings.”

Take it away, Leslie.

I am especially thrilled to be a guest of the Wicked Cozies today, as this is the release day of A Measure of Murder, the second in my Sally Solari culinary mystery series. And in celebration of all things wicked, I present a post about telling lies.

When Is a Lie Really the Truth?

Not long ago during a morning bike ride, I stopped to chat with another cyclist as we lifted our skinny-tire road bikes over a section of railroad tracks. “Lovely morning!” she commented, and I responded in kind. “I’m not often out this early,” the woman added, “but it’s great.”

“Oh, this is when I usually go riding,” I answered, “because I have a dog who always wakes me up early.”

The woman chuckled and gave me a knowing smile before riding off. Now, this may not seem like an out-of-the-ordinary exchange, and you may in fact be wondering what point it could possibly have. But here’s the thing: My dog, Ziggy, almost never wakes me up in the morning. She pretty much always sleeps in—well past the time I ever get up.

So the point is, I lied to the cyclist. And for no apparent reason. The fib just flew out of my mouth, unwarranted and unplanned. Now, why the heck did I do that? I wondered as I pedaled off in the opposite direction.

Weeks later, I was contemplating a suitable subject for this Wicked Cozies blog post and decided it would be fun to write about something “wicked.” And then, remembering my interaction with the woman at the railroad tracks, it occurred to me that telling lies is certainly considered wicked—at least in most circles.

Okay, then: Why did I make up that story about my dog?

Perhaps the first thing to do is recognize the difference between outright lying and embellishing. Or exaggerating. Or telling tall tales. Every story-teller wants to spin a good yarn, so the tendency is to embellish. And if your audience is enjoying what you’re doing, you kick it up a notch. Just look at the tales of Paul Bunyan and his giant blue ox. Or the “news” stories reported by Mark Twain when he worked as a journalist, which often failed completely to distinguish between fiction and fact.

So maybe when I told my fellow cyclist about my dog waking me up, it was simply because the real story—that I just seem to wake up early these days—was boring. And even though I wasn’t consciously thinking about it, my unconscious self wanted something better. (My previous dog, by the way, did wake me up early every single morning, so wasn’t an out-and-out lie.)

But tall tales don’t exist solely for their entertainment value. They serve a far greater purpose, and are often “truer” than the literal truth. When used as metaphor, exaggeration can make a point far better than any real account ever could. This is what archetypes and mythology are all about. Through embellishment, they cut straight to the essence, to those attributes which make us human, make us “everyman.”

Okay, so my little fib about Ziggy doesn’t rise to the level of the adventures of Odysseus, or of his modern incarnation, Leopold Bloom https://en.wikipedia.org/wiki/Leopold_Bloom . But the urge to tell a compelling story comes from the same place.

And maybe that need to embellish, to tell that tall tale, to create that metaphor, is what makes us writers. Because when done well, stretching the facts—or even making them up whole cloth—isn’t lying about what happened. It’s actually telling the truth.

Readers: Have you ever caught yourself telling a fib for no reason other than to make your story more interesting? At what point do you think this moves from mere “embellishment” to actual “lying”? (Remember, one commenter wins a copy of the book!)

In A Measure of Murder, chef Sally Solari joins her ex-boyfriend Eric’s chorus, but at the first rehearsal for the Mozart Requiem, a tenor falls to his death on the church courtyard—and his soprano girlfriend is sure it wasn’t an accident. Now Sally’s back on another murder case mixed in with a dash of revenge, a pinch of peril, and a suspicious stack of sheet music. And while tensions in the chorus heat up, so does the kitchen at her restaurant Gauguin, set aflame right as Sally starts getting too close to the truth. Can Sally catch the killer before she’s burnt to a crisp, or will the case grow as cold as yesterday’s leftovers? 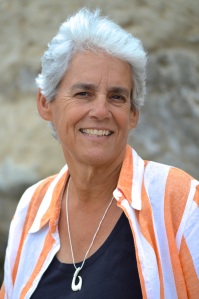 The daughter of a law professor and a potter, Leslie Karst learned early, during family dinner conversations, the value of both careful analysis and the arts—ideal ingredients for a mystery story. She now writes the Sally Solari Mysteries (Dying for a Taste, A Measure of Murder), a culinary series set in Santa Cruz, California. An ex-lawyer like her sleuth, Leslie also has degrees in English literature and the culinary arts. She and her wife and their Jack Russell mix split their time between Santa Cruz and Hilo, Hawai‘i. Visit her online at http://www.lesliekarstauthor.com/ and at https://www.facebook.com/lesliekarstauthor/