by Barb, back in New England, where the cold and gray have me pining for Key West

The cemetery in Key West is a spot most tourists visit. It’s best known for its above-ground graves, like in New Orleans, and the light-hearted epitaphs of some its inhabitants, including the tombstones that say, “I told you I was sick,” “I’m just resting my eyes,” “If you’re reading this, you desperately need a hobby,” “I always wanted a little plot of land in Key West,” and “Devoted fan of singer Julio Iglesais.”

The cemetery was founded in 1847, after the previous burial grounds were washed away in a hurricane, though some of the graves, brought there from the earlier cemeteries, are older. Containing approximately 100,000 graves, more than three times the living population of Key West, the still-active cemetery is the only game in town, the final resting place for people of all religions, races, occupations and classes.

In addition to the regular walking tours, three times a year, the Historic Florida Keys Foundation offers a “Cemetery Stroll,” as a fundraiser. Living interpreters, often with a connection to the dead, tell the stories of some of the people buried there. Bill and I took one of those tours in March. There are so many interesting people buried in the cemetery, you can take these tours multiple times.

Here are just a few of the fascinating people whose stories we heard on our tour.. 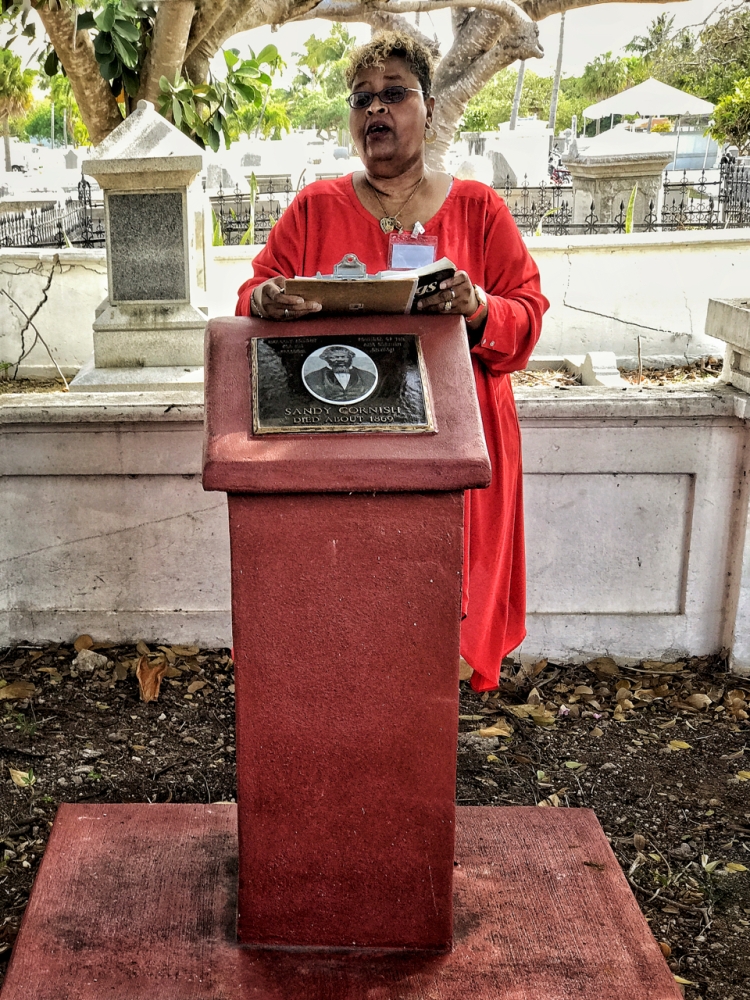 Sandy Cornish was born a slave in 1793. In 1839, he was able to buy his freedom for $3000. His emancipation papers were burned in a fire that swept through the wooden buildings of the city of Port Leon in the Florida panhandle where he lived and worked. Unable to prove his status as a free man, when slave traders tried to take him to the market in New Orleans, he gathered a crowd in a square in Port Leon and publicly maimed himself, cutting his Achilles tendon, stabbing himself in the hip with a knife, and cutting off a finger. Worthless as a slave, he and his wife Lillah, whose freedom they had also purchased, moved to Key West. They founded a farm and orchard on the land where our rented house now stands and prospered, becoming one of the wealthiest couples in the city. Sandy Cornish founded the Cornish Chapel of the AME Methodist Church. The church houses a thriving congregation today.

The exact location of Sandy Cornish’s grave in the Key West Cemetery has been lost to history, so a memorial was recently erected. The story of Cornish’s life was told by well-known local singer Wilhelmina Lopez-Martin, who sang the intro and the outro. 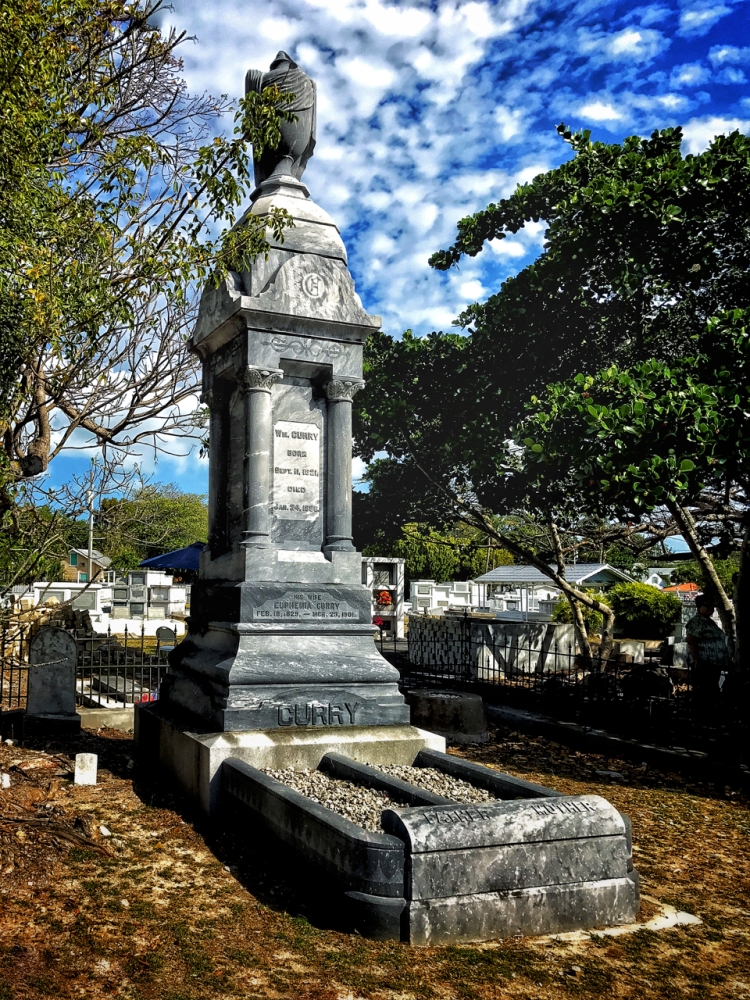 William Curry arrived in Key West penniless from Green Turtle Cay in the Bahamas in 1837. He died as Florida’s first millionaire. He had many enterprises, but made the bulk of his fortune wrecking, salvaging goods from ships that wrecked in the treacherous waters of the Keys. This is how many early Key West fortunes were made. You can tour and even stay in The Curry Mansion, which is a Bed and Breakfast today.

On the Cemetery Stroll, William Curry’s story was told by Clinton Curry, a distant relative who still lives in Key West. 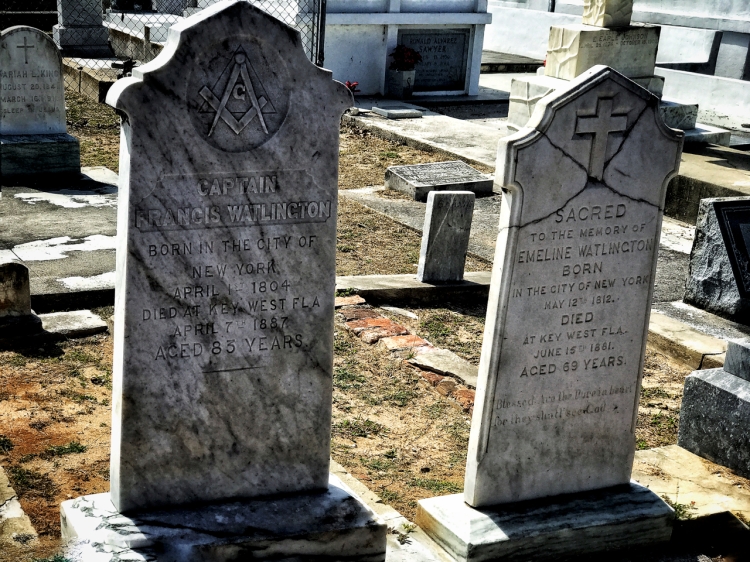 Captain Francis Watlington and his wife Emeline raised their nine daughters in the house that is now the Oldest House Museum in Key West. Though Key West stayed with the Union in the Civil War, Captain Watlington joined the Confederate Navy. After the war, he lived principally in New York City, though he returned to Key West in his final years to be nursed by his youngest daughter, Lily, who had similarly cared for her mother and two of her sisters. She died in 1936. Earl Johnson was the last descendant to live in the house until his death in 1972, meaning the house was continuously lived in by one family for around a hundred and forty years.

The Watlington family’s story was told by Karl Reutling, a docent and historian at the Oldest House. 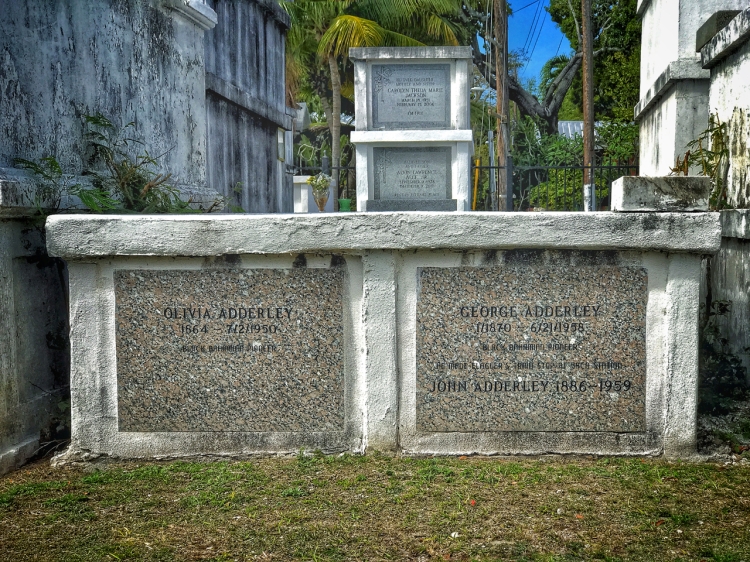 George and Olivia Adderly immigrated separately from the Bahamas in 1890 and married soon after. They purchased land on Vaca Key which is now part of the City of Marathon. They built their home out of tabby, a kind of concrete made by burning shells to extract the lime. Incredibly the home still stands today, despite hurricanes and the punishing tropical climate, and you can tour it. The Adderlys attracted a Bahamanian community around them that thrived on sponge-fishing. When Henry Flagler built his railroad to Key West and needed a right of way over the Adderly land, George Adderly, a literate, but otherwise unadvantaged black man, went toe-to-toe with the richest and most powerful man in Florida, and demanded a station stop at Vaca Key in return. Flagler acquiesced.  The stop meant the men of the little settlement could more easily move their sponges to market in Key West, while the women made money selling garden produce and baked goods to rail workers and travelers at the stop. 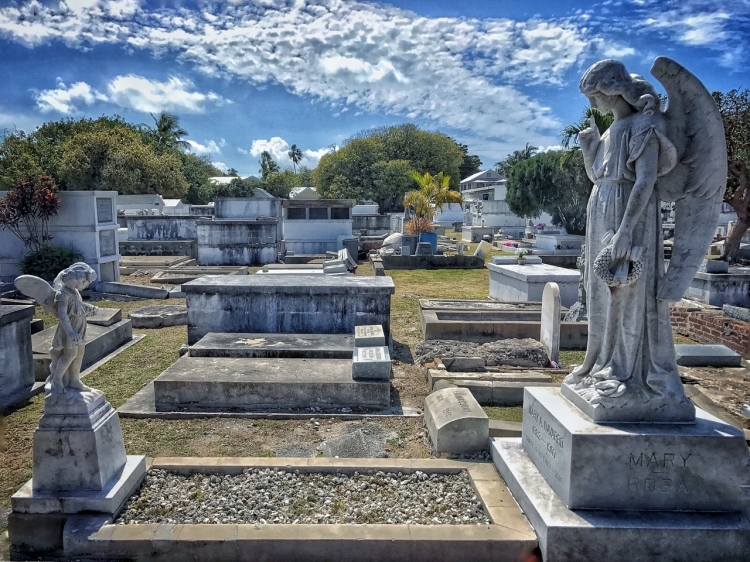 One of the most photographed graves in the Key West Cemetery are the mother and child angels at the graves of Mary and Rosa Navarro, which have recently been beautifully restored. The inscription on Mary Navarro’s statue says, “To the sacred memory of a brokenhearted mother.” The Navarros made their money in cigar-making and at the turn of the twentieth century, their interests took them to Manhattan. Rosa Navarro died in a fall from their apartment window when she was nine. Though her mother lived four years longer, she never recovered, following her daughter in death in 1907.

The Navarro’s story was told by Ron Wampler, and Diane Silvia, Executive Director of the Historic Florida Keys Foundation which is responsible for the restoration.

The stories in the Key West Cemetery, of fortunes made and lost in wrecking, farming, sponging, and cigar-making, of lives of triumph and tragedy, are the stories of the history of Key West. Even the tongue-in-cheek inscriptions I quoted at the top are a part of the irreverent atmosphere of the island. I’ve included just a few of the fascinating lives we learned about on the tour.

Readers: Do you ever walk in or visit cemeteries? What have you seen and learned?