Breaking news! Here are the winners of the books from yesterday’s drawing. It was such a great response that I drew a third winner! Keep an eye out for future giveaways! The winners are: Jill @Bonnjill, Sharon Forrest, and Stephanie Clark! Thanks to all of you who entered! 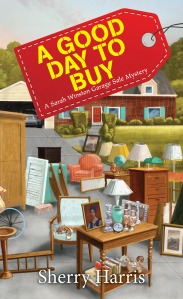 We continue to celebrate the release of Sherry’s latest book, A Good Day to Buy.

As Sherry mentioned yesterday one of the themes of the book is heroes. In your opinion, what defines a hero and who are some of yours?

Edith: That’s a thought-provoking question. For me heroes are the quiet people working selflessly to help others. A woman in my town has been tireless in her efforts to run a food pantry and soup kitchen, which, sadly, more and more people need to use. Our local women’s crisis center has quietly helped many women extract themselves from abusive situations and find a better life for them and their children.  My late friend Richard was responsible for planting a thousand trees locally over a ten-year period, to both beautify and clean the air. Those are my heroes.

Barb: On the day of the Boston Marathon bombing, if you were a victim, and you survived the blast, you lived. This to me is the most extraordinary thing. I don’t mean to minimize in any way the challenges faced by the survivors, but the amazing work of the first responders on the the scene, the volunteers in the medical tents, the medical and non-medical personnel at the eight Boston hospitals where victims were taken, and the ordinary people on the street who ran toward the carnage instead of fleeing, still takes my breath away and makes me a weepy. Fred Rogers said, “When I was a boy and I would see scary things in the news, my mother would say to me, ‘Look for the helpers. You will always find people who are helping.'” The helpers are my heroes.

Sherry: Wow, Barb! That is so beautifully said I think it’s a drop the mic moment! In A Good Day To Buy Sarah is called a hero and she doesn’t like it because she doesn’t feel like she is one. And maybe that is the strongest indication that you are a hero. Many of the people Barb mentioned would say they were just doing their job or that they were just doing what anyone would have. I think all of us have a bit of hero in us. It might not be something huge like saving someone’s life. Sometimes small things like listening to a friend or helping a neighbor are heroic.

Jessie: One of the things I believe defines a hero is a willingness to take on risk. For that reason immigrants are amongst my heroes. I am in awe of those who leave familiar lives, languages, customs and families to start lives in far away lands. No matter what motivates them to strike out I admire their grit and determination and am so grateful for the richness they add to all our lives.

Liz: Wow, you guys have all said this so well. For the past seven years I’ve worked with Safe Futures, an organization that is working to end domestic violence, and every single one of the people involved there is a hero. They work tirelessly, they work endlessly and they put the survivors and those in need of help first, no matter what it takes. Someone who is that committed to a cause for good is truly a hero.

Readers: Who are your heroes?