Hey, it’s Liz and I’m so happy to welcome Karen Olson to the blog today! She’s talking about writing a strong sense of place. Take it away, Karen! 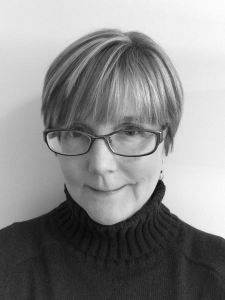 As the former travel editor of the New Haven (CT) Register, I love books that have a strong sense of place, like Laura Lippman’s Baltimore, Sue Grafton’s Santa Teresa, Dennis Lehane’s Boston, Michael Connelly’s Los Angeles. I want to feel like I’m really there, like I’m really in that scene walking down a particular street, the details on the page coming alive in my imagination.

I set my first mystery series in New Haven, which was the obvious choice. I’ve lived in the area my whole life, I’ve worked here. I love the city with its distinct neighborhoods and history and amazing pizza. I wanted to bring the city alive to my readers, most of whom might never get to see it in person. My next series setting wasn’t such an easy choice. I was going to write about a tattoo artist, and I felt that the location needed to match the edginess of the character. I picked Las Vegas, despite having been there for only two days 12 years before. It’s easy, I thought, because Vegas is everywhere: on TV, in movies, in other books. But about halfway through writing The Missing Ink, I told my husband, “We have to go to Vegas.” It was the right choice, because the words flowed onto the page after that, and I feel that the series evokes the craziness that’s Vegas.

All series come to an end eventually, though (Sue Grafton’s on Y now, and we all know what that means), and I struggled a little with what I was going to do next. I’d written some pages a few years before, and my agent urged me to finish it.

It was set on Block Island.

My husband and I spent our honeymoon there, and we’d visited again after that. But it was after I took a press trip to the island and wrote a piece for the newspaper that I decided to set the book there. “I’ve been missing for 15 years,” is the first sentence in HIDDEN. I had no idea who she was or why she was missing, but I knew where she was. The story grew out of that one small sentence, and Block Island was a perfect place for someone who was off the grid, concealing her identity—and, as it turned out, her crime. As I wrote, I closed my eyes and could see the stone walls, the lighthouses, the marinas, the tiny airport, the bar where she meets her friend Steve. I could feel her fear as she tries to hide from her past.

I wish I could have left her there. But my editor wanted a series, and she was already sequestered on a small island in the middle of the St. Lawrence River in Quebec, another idyllic place that I’d traveled to.

My Black Hat Thriller series has become a travelogue of sorts, as computer hacker and fugitive Tina Adler is always on the move. From Quebec, she goes to Miami, then to South Carolina, and then to Paris. Google street view is my new best friend, as I pore over my photographs and notes from my travels. I’ve probably got some things wrong, but the sense of place is what I’m striving for. I want my readers to feel like they know a place after putting down my books, like I feel when I’ve spent time in Rob Hart’s Prague or Ian Rankin’s Edinburgh or JA Jance’s Seattle or Carl Hiaasen’s Miami.

What is your favorite book with a strong sense of place?

Karen E. Olson writes the Black Hat Thriller series. She won the Sara Ann Freed Memorial Award for best debut mystery and has been nominated for a Shamus Award. She balances writing with working full time at Yale University Press. She is empty nesting in Connecticut with her husband and cat Eloise. Please visit her website at www.kareneolson.com.