I have met Nikki Woolfolk a couple of times, but know her best through Facebook. I love reading about her work as a Chocolatier, love of steam punk, and writing career. When I found out that her book, MISE EN DEATH, was coming out on October 15, I invited her to the blog so you would all get to know her as well. Welcome, Nikki!

3 Ways to Create Captivating Characters Without Bogging Down Your Plot 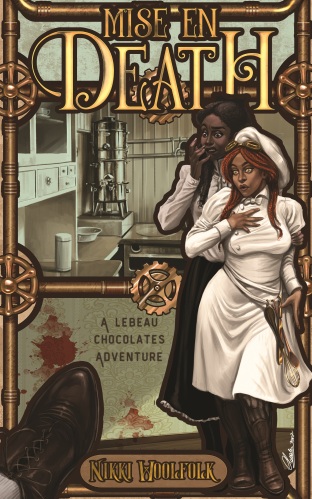 A tale of whodunit is what makes us pick up a novel, but what make us devour a story are the characters.

Creating engaging characters is similar to being given juicy gossip minus the risk to reputation. In mystery novels, our guilty pleasure of peeking into another life and sharing their worries is rewarded. The author invites us into the sleuth’s world through the relationships between secondary characters, setting, and their career. Those relationships act as a mirror for our main character and sometimes the reader themselves.

The old adage of how a person treats the wait staff at a restaurant tells you all you need to know about them runs true for fictional characters. Whether it has two legs or four paws, readers learn about the main character by how they communicate with those around them. Instead of info dumping an author can use dialogue between the sleuth and secondary characters to show who they are while moving the plot forward.

Setting goes beyond a weather forecast. Setting is a time or a place that helps to set a mood for your readers as your characters navigate in the world they live, the cultural atmosphere and historical setting.

Growing up in the West coast, with a father born in the South and a mother born up North gave me a unique perspective. A perspective I was not aware of until I recently gave ARCs of my newest mystery, MISE EN DEATH, a historical culinary cozy.

I did mention the Louisiana summer humidity in the fictional coastal town of Honfleur, but to help immerse readers into the world I used Southern nuances. One way was in a name. Mister Jones. Mister Jones is a fellow student at the school, but his peers are called by their given name without a title.

A few of my New England readers pointed it out believing it an error. My Southern readers or those raised by Southern family did not give it a second thought and continued reading. In Mister Jones I am telling the reader the race of Mister Jones, sharing the cultural dynamics and hinting at the alternative historical universe I’ve created.

While attending college I wanted to follow in one of my uncles footsteps and become a psychologist. My studies brought me to see motivation, patterns, behaviors and other factors come into play with people. In the end I chose a different career path, but I kept the “what if” aspect of my psyche when developing characters. The largest what if I chose to explore was the Civil War.

What if the Civil War never had happened?

How would this affect our society? Would women have further advances in career and their place in leadership rolls?

The world I’ve created is not filled with endless gadgets or the window dressing per se. This society and its culture, reflect the positive psychological outcomes made due to the women’s movement, Nat Turner’s revolt succeeding, and the promotion of equal education for all in the States.

Where MISE EN DEATH begins is decades later and the people still have the same fears and joys that connect readers. Cozy mysteries can be set anywhere but are always about the people living and working within the town.

Often times readers are either wanting to live vicariously through the sleuth’s career. The reader trusts the author to draw them into the story, not just read it.

Writing my sleuthing heroine as a chocolatier working at a culinary school was my way to share what few are privy to. Enough people watch cooking shows and read recipes, but in MISE EN DEATH the reader gets to walk in sleuthing chef’s shoes, observe her relationship with her students and see students find their place in the world of cuisine.

In MISE EN DEATH solving the murder of the millionaire Madam Brookmeyer is of great importance to our sleuthing chef, but knowing why it matters lies in the heart of the school and its importance to the students and employees.

Characters are what a mystery story is about, but living in their world as they solve the crime is what keeps us turning the pages.

ABOUT MISE EN DEATH:
Alex LeBeau, Chocolatier and chef instructor, wants nothing more than to give her almost grown son a quiet life and a place to call home. Settling in Honfleur, Louisiana, Alex can distance herself from her chaotic romantic past and association with the clandestine group Bellicose Solanum (BelSol).

Things might be looking up for her when she takes a job at a promising cooking school. Her contentment is short-lived when a famous millionaire of Honfleur is murdered during the school’s catering event on an airship.

As the body count begins to rise in an eccentric series of mishaps, all evidence points to one of her most beloved culinary students—her son.

If word gets out about the murder, the culinary school’s reputation is ruined, but most importantly Alex cannot let her son be found guilty for a crime he didn’t commit.

With the help of Josephine, the school potager and voice of reason, Alex hesitantly rallies up old friends from her checkered past to help clear her son’s name.

Armed with the fortune that might (or might not) favor the brave, Alex and Josephine race to find the killer before those nearest to Alex become the latest victims.

BIO: Nikki Woolfolk is a Professional Chocolatier, Author and active member of Sister in Crime, Romance Writers of America and Mystery Writers of America. Nikki enjoys pulling readers into a humor-filled into a spectacular cogged and geared world.

While sought after for her informative Chocolate Tasting sessions at conventions, Nikki also uses her polymath talents to pen articles on the craft of writing, apply her computer science training to her New Adult Blerd Grrl series (Now That Your Joystick’s Broke), and her culinary and aviation knowledge to create a sleuth chef that cooks up Steampunk adventures under a digirible filled sky. (Mise en Death– a Bittersweet Mysteries series, RIVETED: a Collection of Steampunk Tall-Tales).

Get the scoop on upcoming books, chocolate and appearances. Add your email to our BOOKS & CHOCOLATE monthly newsletter NikkiWoolfolk .com.

Get answers. Get chocolate. Get hooked!

One woman, three names, many books. As Julia Henry she writes the Garden Squad series for Kensington. As J.A. Hennrikus she writes the Theater Cop series, and as Julianne Holmes she wrote the Clock Shop series. Click on my profile picture to connect with me on Facebook and Instagram! @JHAuthors View all posts by Julie Hennrikus aka Julia Henry