The winner of A Passport To Murder by Mary Angela is Cozynookbks! Please send your contact information to maryangelabooks@gmail.com

In the 1960s, my mother had a challenge. Her annual Christmas cookie baking resulted in ten unused egg whites. Unwilling to throw them away, she searched for a recipe that would use them up. The first year she made actual coconut macaroons, shaped like wreaths with red food coloring bows and green leaves. I thought they were beautiful and delicious (I still love macaroons) but in a couple of days they were hard as rocks. Since my mother did her Christmas cookie baking in a flurry in one day (as I do), then stored the cookies in tins and doled them out for gatherings and parties all month, that wasn’t going to work.

Then she found a recipe for “marangoons.” These tasty concoctions were pure 1960s cooking. (Even the Google won’t find a recipe for me now.) The egg whites are beat with confectioners sugar, and then cornflakes, shredded coconut, and chocolate chips are folded in. The resulting mess is dropped by spoon onto cookie sheets and baked. 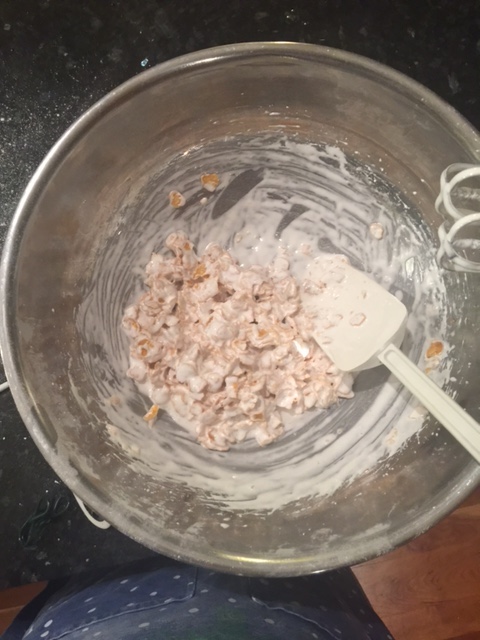 That was the recipe that stuck. My mother called them “trash cookies.” They were meant to use up the egg whites and to maybe help fill out a plate full of cookies, but other than that her disdain for them was total. They were the very poor relations of the more refined rolled and cut cookies, the butter cookies and the hazelnut wreaths, which were tons more work, required more expensive ingredients, and most important, a more discerning palate to appreciate their subtle flavors.

The cognitive dissonance was a little much for me, but I rolled my eyes at both of them and went on.

The truth is, the marangoons don’t last all that long or travel well. Nonetheless, when I became the primary cookie maker in the family, I would ship a tin full of all the different kinds of cookies to my parents. “I don’t know why you even include the marangoons,” my mother would say every year. “They’re stale when they get here.” But I continued to include a few, which tells you something about my personality.

My husband, in keeping with his personality, has tried to upscale the trash cookies. Really good chocolate chips do make a difference, but fancy coconut was terrible and the organic free-range cornflakes he bought at Whole Foods turned into a sodden mass. Better to stay with Kelloggs. I told you it was a 1960s recipe.

I lost the actual recipe a few years back, and by then what I was doing bore only a passing resemblance to the original directions.

I made half the usual amount this year, because I’m doing some of my cookie baking with my granddaughter in Virginia later in the month. Here is how I made the marangoons.

In a large bowl, beat the egg whites, adding the confectioners sugar gradually until it is a gooey mess. Fold in the cornflakes, then the chocolate chips, then the coconut, mix thoroughly.

Drop by the spoonful onto cookie sheets lined with parchment paper.

Bake at 350 degrees for fifteen to twenty minutes. 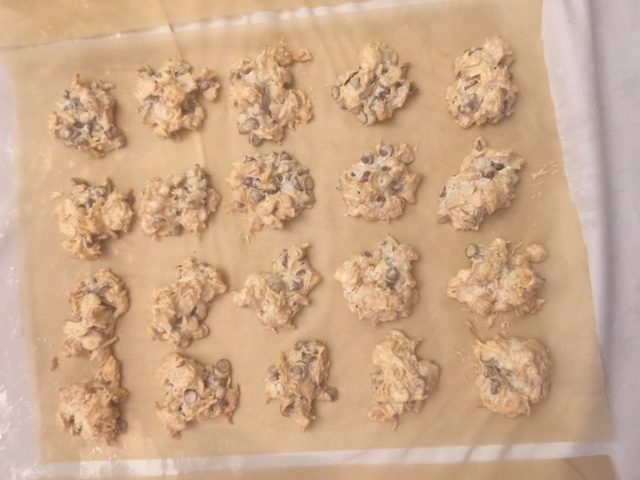 Readers: Do you have a recipe that is like a poor relation that came to stay?