It’s the month that includes Valentine’s Day right smack in the middle, so let’s talk 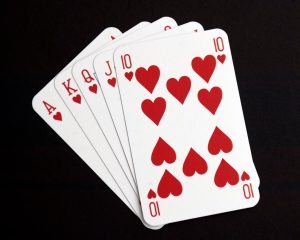 hearts every Wednesday. Today, what about the card game Hearts? Who plays it? What’s your strategy for shooting the moon? If you don’t play Hearts, what other card games do you like? Dish! (Photo credit: commons.wikimedia.org/w/index.php?curid=26889555)

Jessie: The only card game I play with any regularity is Rummy. My mother and grandmother used to play when I was a child and they were a bit competitive about it. One afternoon when I got home from school my mother had been having an unusually good run of luck. My grandmother offered to pay me a dollar if I could beat my mother at a hand. It was the first dollar I ever earned.

Liz: I don’t know that I ever played Hearts, but where I come from (the Valley) we had a card game called 45s. I swear it was invented by someone in the Valley and stayed in a radius of ten or so miles, because no one outside of the town where I grew up has ever heard of it. But my brother and I learned to play at a young age, mostly because my grandparents played. They were SERIOUS about it, too. They played for fun with us, but every weekend they had card games with their friends and man, they were worse than high stakes poker games. I remember many a 45s-related disagreement between friends that lasted for weeks!

Edith: Indeed, Liz – I’ve never heard of 45s. We play Hearts when my sons are home. My older son has an amazing memory and he can track who played what when. When our young friends are here we play cards with them. I taught them what grownups call BS but with the kids we call it No Way. It’s a really fun bluffing game. I played rummy growing up, and my mother tried to teach us Canasta but it never stuck. When I listen to my favorite radio shows on Saturdays, I play solitaire. If I just sit and listen, I fall asleep. If I try to do something like cook, I don’t listen carefully. It’s the perfect solution, and I have found I normally win at least once an hour.

Barb: I played way too many games of hearts in college, and pinochle, bridge–basically any trick-oriented game–in the coffee house in the basement of the Quad at Penn. When my kids were growing up we played mad games of poker at our cottage, and then when the kids went to bed the grownups would play pitch. I don’t play many card games lately. I love to sit and read a book and listen to the rest of the family playing card or board games. However, I’m rethinking this. My mother-in-law played kalooki with a group of friends every week until a month before she died. Now they play with a photo of her in attendance. Keeps your mind working and keeps you connected with friends. Who can ask for more?

Sherry: I think I played Hearts once and got the highest score anyone had ever seen. As I recall that’s not a good thing. We grew up playing all kinds of card games: War, Solitaire, Whist, Spades, etc. In college we played Spades ALL THE TIME. As adults we’ve played Euchre and lots of games of rummy. My parent’s tried to teach me Bridge but it seemed more like work than fun.

Julie: I think I’ve played Hearts, but I’m not sure. I grew up playing Gin, and Rummy, and Gin Rummy. My favorite card game is Cribbage. I learned by watching my grandfather teach my parents how to play, and would play for hours with him. BTW, Barb, I love the idea of weekly card games with friends. Wonder if we could Skype one?

Readers: What card games do you play? Anybody up for a game of Wicked Cozy Hearts?