The winner of Lillian’s book is Kimberly. Watch for an email from her!

I’m so happy to introduce Lillian Bell to the Wicked family! I first met Lillian at Left Coast Crime when we were on a panel together. Her big smile and sense of humor won me over immediately. A Grave Issue is the first book in the new Funeral Parlor Mystery series from Crooked Lane Books. Here’s a little bit about her book: 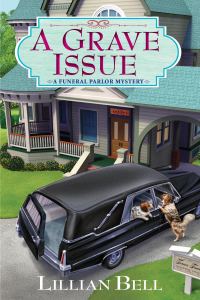 After an on-air gaffe goes viral and jeopardizes her career, journalist Desiree Turner retreats home to Verbena, California for some peace and quiet. She begins working one of the quietest jobs around: presiding over funerals for her great-grandfather’s funeral parlor. But the action seems to follow her as a fistfight breaks out between neighbors Rosemarie Brewer and Lola Hansen at one of the first funerals she’s in charge of running. It exposes a nasty dispute and Rosemarie’s husband, Alan, is found murdered shortly after.

Lola’s husband, Kyle, is immediately arrested. Desiree, whose own father’s death was devastating, has always viewed Kyle as a second father. Determined to clear his name, Desiree jumps head first into the investigation and quickly discovers that Alan had several unsavory habits at his job and in his personal life, including putting assets into his mistress’s account to hide them from Rosemarie. People murder for money and love all the time, and there’s no telling who he offended just enough to push them over the edge.

Desiree is looking in all the right places, but she better catch the killer fast before they come for her next in A Grave Issue, the clever series debut by Lillian Bell.

When the opportunity to write a humorous cozy mystery that takes place in a funeral parlor arose, I jumped at it. It wasn’t until I tried to tell people about it, that I realized not everyone saw the possibilities. A funny book about deaths in a funeral parlor? I got more than a few polite smiles while people took a step or two back from me.

I blame my family  — my two sisters, in particular — for my morbid sense of humor. In times of great sorrow and stress, we make jokes and then laugh inappropriately. It’s generally unseemly and a little unattractive and has gotten us kicked out of more than one ICU, but it has also gotten us through some dark dark days. There’s only been one time I can think of that one of us (that would be me) made a joke so dark and inappropriate that the other two didn’t laugh. It’s kind of a badge of honor.

It’s not that we don’t respect death and the grieving process. We do. We’ve done our fair share. Possibly a little more than our fair share, to be honest. In fact, I think that’s why we make the jokes we do. There’s a well of sadness there that’s too deep. If we fell into it, we might not be able to climb out. Humor provides us with the rope we need to pull ourselves out of it.

That laughter is also a bit of defiance. Yes. Death is inevitable. As one sister often says, none of us is getting out of here alive. That doesn’t mean we can’t have fun in the meantime, though. So we laugh in death’s face.

It also breaks the tension. We are an anxious set of people, my sisters and I. I don’t know if it’s nature or nurture, but the three of us share both those things so it doesn’t really matter. Funerals and all the rituals around them put a strain on everyone. Nothing diffuses a burgeoning argument over what music to play or what food to serve or what to put in an obituary than a really terrible joke that is both horrifying and hysterical.

We use our laughter to honor people, too. We reminisce about the times the people we miss made us laugh. Okay. Sometimes we were laughing at them and not with them, but it still keeps them alive in our thoughts and hearts.

That balance between sadness and laughter along with a bit of defiance was what I tried to strike as I wrote A Grave Issue (and its follow-up If the Coffin Fits). I wanted my heroine to respect the people who were grieving and to take her job seriously, but I also wanted her to be a bit of a rebel and to be able to laugh at herself.

Readers: Does anyone else laugh inappropriately to get them through tough situations? What was the worst place you cracked up yourself or someone else? 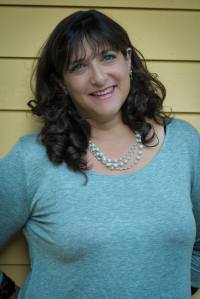