Edith here, in the busy second half of a busy month. And I’ve been thinking about kindness.  This is a card someone was handing out at Quaker Meeting recently.

We’ve all been witnessing way too many unkind, malicious, and violent acts, whether on the news or in person, of late. Horrifying events. Disgusting acts. Cowardice and rudeness.

Can kindness counter what seems like a tidal wave of really bad behavior? Can it be contagious? Think of how you feel when somebody you don’t even know does you a favor. Smiles, prepays your coffee, or writes and email out of the blue to say how much they loved your book. Kind of makes you want to return the gesture, doesn’t it? 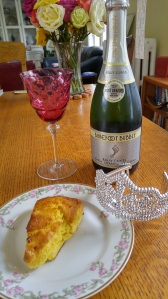 Saturday I woke up earlier than usual, put on my tiara, grabbed a scone I had baked the day before (I left the bubbly for later, since it was only five thirty in the morning), and headed for the television. I didn’t care that Hugh looked at me like I was a lunatic. I didn’t care about all the zillion dollars a royal wedding costs.

I wanted to feast on love and kindness and the beauty of a fellow Californian breaking a bunch of barriers. I was oddly especially touched by Prince Charles accompanying Meghan partway up the aisle, and by his warm – and kind – courtesy to her mother Doria Ragland after the ceremony.

Later in the day I happened across a Facebook post by Alexia Gordon, a talented mystery author whom we have had as a guest right here on the Wickeds. Here’s what she wrote, after listing some of the horrors in the news during the last week alone:

“Then this morning I saw a man look at the woman he was about to marry as if she was more important to him than air, light, and water. I heard the first African-American leader of the Episcopal Church buck 1000 years of British tradition and remind a bunch of stuffed shirts that slavery happened, that genuine Christianity is about love and justice, that love will save the world if we have the courage to act in love.

“I heard a Black cellist perform classical music and a Black choir sing Black music–slave music–in a White church. And I remembered that THIS is normal. All that garbage I exposed my brain to yesterday is not normal. That stuff is sin, it’s evil, and it should be treated as such. It shouldn’t get all the airtime. Real normal–love and justice and inclusivity and hope–should get equal press coverage, if not more. A constant diet of hate makes you believe hate is the only option.

Thank you, Alexia. Let’s all normalize kindness, justice, and love, shall we? Let’s have a constant diet of kindness. The back of the Kindness Matters card gives a bunch of examples of what we can do. 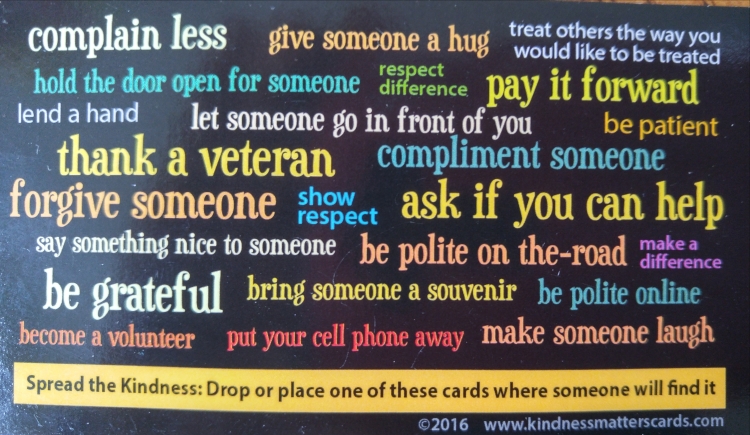 Who’s with me? Will you share with a stranger that you love her glasses? Tell a tired mom with a screaming child that you know it’s hard? Let someone into traffic ahead of you? Offer to blurb a debut author’s novel or read a beginner’s short story?

Readers, share your favorite kind thing to do.  And Alexia, thank you for putting into words what so many of us have been feeling.