Edith here, about to depart on a real vacation, but first: Susan Oleksiw is our guest on the blog today with her new series debut, Below the Tree Line.

I owe a special debt to Susan – way back in the mid-nineties I joined a writers’ group she hosted in her home. Susan was my first creative writing teacher – or first since grade school, anyway. In her group I started working on what became (19 years later) the first Local Foods Mystery. I learned a huge amount not only about things like point of view, naming characters, story pacing, and using weather only in the service of the story, but also how to offer kind AND constructive critiques.  Thank you, Susan! I’ve read and loved all her books so far, and I’m delighted she’s joined the Midnight Ink publishing family with this new endeavor. 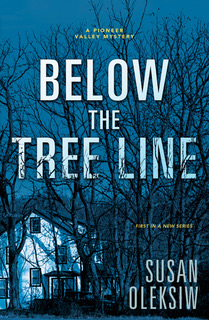 Here’s a condensed book blurb:  In the Massachusetts countryside, family secrets run deep . . . but an outside threat could uproot them all. Felicity O’Brien hopes the warning shot fired from her porch is enough to scare off the intruder who’s been snooping around her family’s farm. Days later, when two young women are found dead nearby, Felicity can’t figure out how the deaths are related, and even her inherited healing touch isn’t enough to ease the community’s pain over the tragic loss.

Felicity know someone wants something bad enough to kill for it, but all she has is the neglected property her parents passed down to her. Joining forces with a friend, Felicity tries to uncover the truth and save herself and her land from those who are capable of unthinkable harm.

And Susan is giving away a copy of this intriguing new mystery to one commenter here today (US only)!

My new series is set in the Pioneer Valley, one of the most beautiful if little-known spots in New England. Felicity O’Brien, who has recently taken over managing Tall Tree Farm from her dad, cobbles together a number of jobs to keep things going, and in doing so she interacts with the larger community. This is the best part about setting a story in a rural area–discovering the minor characters who emerge from the shadows as suspects, villains, victims, or unexpected helpers. They tend to arrive on their own, with little or no effort on my part, and then prove themselves useful. If not, they get folded into another, more important character. But where do they really come from?

Right after college I worked as a case manager in child welfare in a rural area where the size of the farms was measured by the number of cows. The average farmer owned fifty cows. That was true in the 1960s and it’s true today. Not much has changed in that part of the world.

Over the years I moved far away from farms and child welfare, but I never forgot many 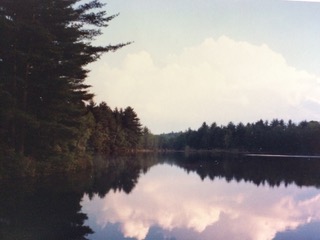 of the people I worked with, or the children I served. Some of their life stories stayed with me. You might even say they haunted me. I can still recall my supervisor handing me a file for one child in particular as she said, “We’ve all gone a round with Stevie [not his real name]. Maybe you’ll have better luck. You’ll adore him. We all do. Oh, do you smoke? Don’t take any matches with you when you visit.”

Sometimes the character was one I already knew in a different context and met in a new way. In many parts of the country, people (and I have been one of them) receiving regular visits of Jehovah’s Witnesses on a Sunday morning shut the door politely or impolitely on them. But in West Woodbury, the small town where Felicity lives, the man or woman witnessing is too intricately woven into the fabric of the community to not receive a friendly welcome.

When invited in, he might just as easily fall into a discussion of the upcoming Town Meeting, or voice a concern about funding for certain programs, or offer an opinion on the new coffee shop opening up on the old highway. And the person he might be visiting could easily be a member of a very different church, perhaps Catholic or Spiritualist or even Buddhist. Rural America isn’t always as conservative as urban Americans think.

This character seems especially useful as I think about all the conversations he’s had, all the things he’s seen by arriving unexpectedly on one of his witnessing visits. I imagine all the little details about the community he’s stored away in his memory.

Felicity O’Brien, farmer and healer, manages Tall Tree Farm with the help of her good friend Jeremy Colson and her future mother-in-law, Loretta, who hijacks every scene she appears in. Caustic, sarcastic, and eagle-eyed where Felicity is concerned, Loretta never 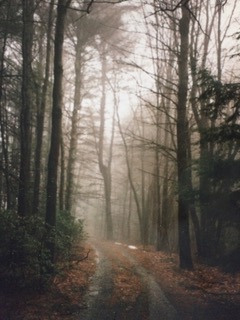 gives an inch unless she’s had two six-packs and knows there are more in the fridge. But she provides crucial information at odd moments.

Visitors driving through the area admire the pastoral view, or enjoy a woodland tramp. But those who live there, in the small towns and hamlets, and deep in the woods off dirt tracks, know what kind of real life seethes beneath the bucolic scene.

Readers:  Do you have a favorite minor character in a mystery novel? Are there people in your earlier years who still haunt your thoughts? Remember, Susan is giving away a copy of Below the Tree Line (US only) – and you won’t want to miss out on reading it!

Susan Oleksiw is the author of twelve mysteries in three series. Below the Tree Line is the first in the Pioneer Valley series. The Anita Ray series features an Indian-American photographer living in South India at her aunt’s tourist hotel. In four books, beginning with Under the Eye of Kali (2010), Anita solves crimes among her extended family, taking the reader into little-known corners of traditional India. The Mellingham series features Chief Joe Silva in seven books. In Murder in Mellingham (1993), Chief Silva solves the murder of a prominent visitor. In Come About for Murder (2016), Joe teaches his stepson to sail, never suspecting the boy will soon be sailing to save his life.

Susan’s short stories have appeared in Alfred Hitchcock Mystery Magazine and numerous anthologies. She published A Reader’s Guide to the Classic British Mystery (G.K. Hall, 1988), and served as co-editor for The Oxford Companion to Crime and Mystery Writing (1999). She was a co-founder of Level Best Books, publishers of an annual crime fiction anthology by New England writers, and The Larcom Review (1998-2003). Susan lives and writes outside Boston, MA. Find her at her web site and elsewhere.