Congratulations  to Kay Garrett and Jana Leah the winners of the giveaway!

Jessie: In New Hampshire still startled to realize that it is the release day for my eighth novel, Murder Flies the Coop! Tonight I wil be celebrating by hosting a Facebook Live event on my Jessica Ellicott page at 8 pm EST. I hope to see a bunch of you there! 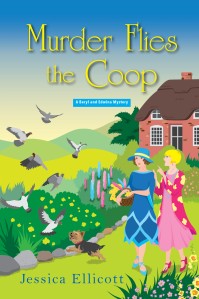 Today is a milestone day for me but it also feels like a special day for my most recent protagonists, Beryl and Edwina. I thought it might be fun to let the ladies take the spotlight and to interview them about some trivia.

Jessie: So, ladies, would you be interested in answering a few questions for the readers here on the Wickeds blog?

Edwina: It doesn’t sound quite nice, does it. I am not entirely sure Vicar Lowethorpe would approve of one of his parishioners associating with anything that could be described as wicked.

Beryl: Come now, Ed, I’m sure it is all meant in good fun. As for me, I’m always up for something wicked. Although I am not sure I have ever heard of a blog before. Is it some sort of newfangled conveyance?

Jessie: It is if you mean a manner of conveying information. It’s a sort of a newspaper or a magazine.

Beryl: Publicity! I have always been rather good with the press. And besides, our fledgling enquiry agency business could always use a way to get the word out.

Edwina: Not so hasty, Beryl. I’m not sure we are ready for such scrutiny yet.

Beryl: If we had waited until we were ready to show off our sleuthing skills you would still have a rather unseemly reputation in the village and no one would have solved the murder of that poor girl back last autumn.

Jessie: I assure you you needn’t answer anything that makes you uncomfortable. It is more of a chance for people to get to know you a little better. Especially you, Edwina since you have spent most of your life out of the public eye.

Beryl: That’s right, Ed. It is your chance to shine. Go on, ask your first question. If Ed doesn’t want to share something she can just make up an answer that pleases her.

Edwina: Beryl, you make me sound like an accomplished liar!

Beryl: Well, you really are a terribly good fibber. But only in service of a worthy cause.

Edwina: I’ll endeavour to take that as a compliment. Perhaps you should go ahead and ask your questions.

Jessie: I think our readers would like to know about your lives before you renewed your friendship and began sleuthing together. Why don’t you tell us about your families?

Beryl: Do you mean the families we were born into or the ones we married into? Although I suppose the latter applies only to me.

Jessie: Either. You decide.

Edwina: My father was a country solicitor and my mother was a woman entirely devoted to nursing her fragile health. I had a younger brother who was unfortunately taken from us far too young. I have never married and do not expect to do so as eligible gentleman are in shockingly short supply, what with the war and then the influenza epidemic. Besides, Beryl has most certainly married more often than enough for the both of us.

Beryl: I shan’t bore you with the details of my childhood. Suffice it to say I left home early and have not made a habit of frequent visits. I have, however, married with regularity as Edwina pointed out. Between the men I  divorced and the ones I buried I’ve been involved with a five families besides my own. Fortunately, I had the good sense to always keep my own name. It made things every so much easier.

Jessie: What about something more up to the present day like favorite foods and pastimes?

Edwina: I do love a full English breakfast and also the teacakes and scones served by Minnie Mumford, proprietress of the local tearoom, The Silver Spoon. Minnie has a very light hand with the pastry. As for pastimes, I spend countless hours pottering in my garden during the growing season. During the winter I knit and all through the year I am an avid reader.

Beryl: It is hard to believe Edwina has time for any of it with all the work she does on committees in the village. Between the WI, the church and the garden club I don’t know how there are enough hours in the day. She makes me look slothful.

Edwina: That is very kind of you to say. But I really am only doing my duty. You have far more interesting ways of amusing yourself than do I.

Beryl: I admit, I do like to hurtle down the lanes and along the hedgerows in my automobile. There is nothing like feeling the wind in my hair and my hands upon the steering wheel. I also love to play poker, lay down a few bets with the local bookie and whip up a shaker of cocktails. As far as food goes, I am not picky in the least so long as I needn’t cook any of it myself.

Jessie: Have you been working on any interesting cases lately?

Edwina: I am not sure we can speak about that publicly. We pride ourselves on respecting our clients’ confidentiality.

Beryl: Come now Ed, surely we can divulge a bit without saying too much.  After all, what sort of publicity will this be if no one knows the range of our services?

Jessie: I promise not to give too much away.

Edwina: Oh, all right. How about you say something like this:

One would hardly call them birds of a feather, but thrill-seeking American adventuress Beryl Helliwell and quietly reserved Brit Edwina Davenport do one thing very well together – solve murders.

Sharing lodging in the sleepy English village of Walmsley Parva has eased some of the financial strain on the two old school chums, but money is still tight in these lean years following the Great War. All of Beryl’s ex-husbands have proven reluctant to part with her alimony, which is most inconvenient. So when the local vicar – and pigeon-racing club president – approaches them with a private inquiry opportunity, the ladies eagerly accept. There’s been a spot of bother: The treasurer has absconded with the club’s funds and several prized birds. Beryl and Edwina hope to flush out the missing man by checking his boardinghouse and place of employment at the coal mine.

But when they visit the man’s loft, they find their elusive quarry lying in white feathers and a pool of crimson blood, stabbed to death – the only witnesses cooing mournfully. After a stiff gin fizz, the ladies resume their search for the missing funds and prized birds – and now a murderer. Beryl and Edwina aren’t shy about ruffling a few feathers as they home in on their suspects. But they had better find the killer fast, before their sleuthing career is cut short.

Jessie: That’s perfect. I’ll be sure to let readers know they can read more for themselves in Murder Flies the Coop, available today, wherever books are sold! Thanks ladies!

Readers, which fictional detective would you like to interview and what would you ask? I have two copies of Murder Flies the Coop to give away to randomly chosen commenters!