It’s always exciting to welcome back a guest like Debra Sennefelder. Even more when she’s here to talk about a second series and how it came to be! Debra is giving away a signed copy of Murder Wears a Little Black Dress and a bookmark to a reader who leaves a comment.

Debra: When I decided to major in Fashion Buying and Merchandising my parents wondered “what in the world is she thinking”. I was thinking school would finally be fun. I could spend my days studying fashion (which included learning to pronounce designer names correctly and naming color swatches but also included retail math, ugh), spend my weekends doing research (aka shopping) for assignments and then graduate with a job on 7th Avenue.

I got the job. I worked in Macy’s Herald Square in the cosmetics buying office. Aside from this writing gig, it was the best job. Ever! The brands were more than happy to supply us working gals in the buying office with all the free skincare products and cosmetics we could ever want and Macy’s gave me a discount. Yes, it was the perfect job. Until it wasn’t. A move up to Connecticut and a two-hour commute put a damper on my enthusiasm and overshadowed the employee discount.

Fast-forward to the fall of 2017 when I sent a proposal to my editor for the Resale Boutique Mystery series featuring an out-of-work fashion buyer who inherits her granny’s old, tired consignment shop. I mined my years at fashion school and working for Macy’s to create the character of Kelly Quinn. Once I had her formed I began filling in her world with the people around her, creating the shop she inherited and best of all, dressing her. Finally my frequent visits to Pinterest, watching YouTube fashion vloggers and shopping trips were research. Now, just to convince my accountant.

In addition to dealing with the loss of her beloved grandmother, Kelly has to deal with her conniving uncle, who had been named executor of the estate and wants Kelly to sell the building the shop is housed in. But, she’s not sure if she wants to do that and besides, the building includes an apartment for her to live in and it’s rent free. Kelly also has to face what she considers to be the biggest mistake of her life – leaving her friend Ariel at a party and then Ariel having to hitch a ride home with another girl who had too much to drink. They got into an accident and Ariel was paralyzed. Guilt has weighed on Kelly all these years and now back in Lucky Cove she has to face the past and try to rebuild the friendship. Then there’s her sister who blames her for the accident. If only she hadn’t gone off with a boy, Ariel wouldn’t have gotten into the car. Somehow Kelly has to find a way to repair her fractured relationship with her sister. If that weren’t enough, a psychic comes into the shop and has a vision of murder.

Having a psychic see a murder while trying on a dress in her shop wasn’t what Kelly was hoping for during her three-day sale. As she digs into the original owner of the dress, she’s drawn into a new murder and she finds herself struggling to keep the shop open and keep herself out of jail because somehow she became a murder suspect.

Who would have thought coming back home could be so hard? But, Kelly takes it all in stride while being fashionably dressed as she tracks down a killer.

I’m so thrilled to be able to share my new release with you and before I go I want to share a fashion disaster that occurred while I was working on the copy edits of MURDER WEARS A LITTLE BLACK DRESS. I know Kelly could relate and would sympathize because having your closet collapse isn’t fun. Luckily, no clothing was hurt. Don’t try this at home! 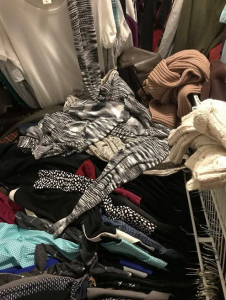 Readers: What is your favorite fashion accessory?

Every woman would kill for one . . .
Manhattan fashionista Kelly Quinn thought she’d left her upstate New York town far behind . . . until the Seventh Avenue expat returns home to revamp her grandmother’s consignment shop into an upscale boutique—and unwittingly sets a trend for murder . . .
After her rising career as a Manhattan buyer is derailed, Kelly has mixed feelings about relocating back to Lucky Cove, in spite of her big plans for the soon-to-be-renamed Curated by Kelly Resale Boutique. What’s left of her luck starts running out when a customer puts on a black lace dress that triggers visions of someone being murdered. As if the haunted “Murder Dress” isn’t enough to kill business, the psychic’s doppelganger cousin has just been found bludgeoned to death.
Was Maxine LeMoyne the real target or was it a case of mistaken murder? With some creepy pre-Halloween bargain hunters walking the night and Kelly suddenly a person of interest, a second murder rocks the close-knit town. Now Kelly could be the one who ends up talking to dead people when she’s stalked by a killer determined to take her out in high style . . .

About the Author: Debra Sennefelder, the author of the Food Blogger Mystery series and the Resale Boutique mystery series, is an avid reader who reads across a range of genres, but mystery fiction is her obsession. Her interest in people and relationships is channeled into her novels against a backdrop of crime and mystery. When she’s not reading, she enjoys cooking and baking and as a former food blogger, she is constantly taking photographs of her food. Yeah, she’s that person.

Born and raised in New York City, she now lives and writes in Connecticut with her family. She’s worked in pre-hospital care, retail and publishing. Her writing companions are her adorable and slightly spoiled Shih-Tzus, Susie and Billy.

She is a member of Sisters in Crime and International Thriller Writers.