All the Wickeds met Sarah Osborne at the Kensington Cozy Mini-Con in Cambridge, Massachusetts (our fair city) in April. Into the Frying Pan, the second book in her Ditie Brown Mystery series, just came out on May 28th, and we can’t wait to read it.

Take it away, Sarah!

It’s a Mystery to Me

I’ve read mysteries all my life, beginning with Nancy Drew, moving on to Agatha Christie and Dorothy Sayers, and finally to Elizabeth George, Louise Penny and the explosion of current writers, including all the Wickeds.

Most of the ones I love fall neatly within the category of cozy mysteries. They have one or more amateur sleuths who are quirky and smart. They have a handful of likely suspects, little blood and gore on the page, and a murder to solve. They keep me engaged but never make me too anxious.

These are the books I try to write.

It’s only when I try to fit my own cozies into a specific sub genre that I run into trouble. My Ditie Brown Mysteries (think Ditie from Aphrodite) don’t seem to land squarely in any subcategory.

As a person who has always had one foot out of the mainstream, I probably shouldn’t be surprised that my books find themselves in a similarly awkward position.

I love food, so I talk a lot about it—preparing it, eating it, and sharing it in the form of good recipes—but these aren’t culinary cozies. Ditie Brown is a pediatrician, not a local chef or baker. She doesn’t leave a large city to come to a small hometown. In fact, she does just the opposite.

History pops up often, especially Southern history, and especially in my second book, Into the Frying Pan. Ditie’s ex-boyfriend, Phil Brockton, the fourth, turns up in Atlanta for his beloved Civil War reenactments, and, as you might expect, murder on the battlefield isn’t far behind. However, my mysteries aren’t historical cozies because everything happens in the here and now.

Ditie and I both love pets, so they are always present. On occasion, they may help save a life, but these are not full-blown animal cozies. My pets don’t talk or solve crimes or become the star of the show.

So, what should I call my cozies? A pot-pourri, a melange, some kind of fusion?

Many cozies today focus more on character than plot, and I don’t fit into that mould either. I love them both. I want my characters to seem realistic and to behave in ways that make sense. I want them to be people you’d like to know as friends (the good ones, anyway), but I also want a twisty plot that keeps you guessing—hopefully to the end. As Sue Grafton said, “My job as the writer is to fool you. Your job as the reader is to see if you can catch me at it.”

Each book is meant to be a fast, fun read for a warm summer day or a cold winter’s night, and I always make sure everything comes out right in the end. The good guys triumph, and the bad guys pay for their crimes. Justice prevails.

At the same time, I don’t shy away from Ditie’s opinions and feelings, of which she has many. She loves herself as she is—short, a little overweight, with curly hair that never behaves—and she loves other people, however they come. She works in a refugee clinic and relishes the diversity. There are events that make her profoundly sad as well as happy.

Maybe it doesn’t matter where my mysteries fit. Perhaps I’m a lot more like most authors than I realize—I write what I love.

Readers: What kind of mysteries do you love? What kind of books draw you in, keep you engaged, and leave you eager to read more? One lucky commenter will receive a copy of Into the Frying Pan. 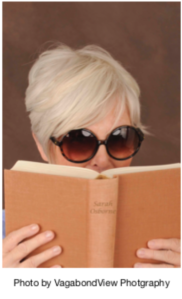 Sarah Osborne is the pen name of a native Californian who lived in Atlanta for many years and now practices psychiatry on Cape Cod. She writes cozy mysteries for the same reason she reads them–to find comfort in a sometimes difficult world. Too Many Crooks Spoil the Plot is the first novel in her Ditie Brown Mystery series. The second book in the series is Into the Frying Pan. Sarah loves to hear from readers and can be reached at doctorosborne.com or visit her on her Facebook Fan Page at Sarah Osborne, Mystery Author