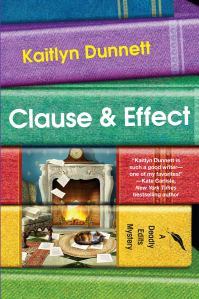 Thanks to Barb and the rest of The Wickeds for inviting me to talk about my new Deadly Edits mystery, Clause & Effect, the second book in a cozy series featuring a retired language arts teacher turned freelance editor as the amateur detective.

Although I enjoy writing about younger characters in my other series, I flat-out love getting into Mikki Lincoln’ss head in this one. Like me, she’s a child of the sixties, with similar memories and experiences to mine but with a much bolder approach to life.

One thing we do have in common is a hesitation to say words like
quasquibicentennial out loud. As Mikki would put it, that’s one that doesn’t come trippingly off the tongue, not without practicing it a few times in front of a mirror.

So what is a quasquibicentennial, you ask? It’s the 225 th anniversary of a place’s founding, in this case the founding of the village of Lenape Hollow, New York. Mikki’s editing skills are needed to turn the pageant performed twenty-five years earlier for the bicentennial into a workable script
for the present-day celebration. She’s reluctant at first to take on the job, rightly suspecting that there will be more to it than a few minor updates.

Two women she’s known since high school, best pal Darlene and “bane of her teenage existence” Ronnie, join forces to talk her into it. As
Ronnie puts it, “would it kill you to visit the archives” at the local historical society, where the only copy of the original script is housed?

As it turns out, getting involved with the historical society can be deadly. Everyone in town believes the author of the bicentennial pageant left the area just before it was performed, but it turns out that she never even left the building. When her mummified remains are discovered behind a wall, Mikki is left to wonder which member of the society might have put her there.

That’s not just idle curiosity. The more she learns, the more she fears the killer may target her next. Even twenty-five years later, there are secrets someone’s willing to kill for.

I particularly enjoy writing (and reading) novels that involve two mysteries, one in the past and one in the present. Weaving all those diverse threads together is great fun, and so is the research necessary to get the details of the past crime right. In Clause & Effect, I have to admit I also got a
huge kick out of repeatedly using a word that tickles me. Say it with me, everyone: quasquibicentennial!

Readers: Tell us a word you love to say. Or just say hi to Kaitlyn. Whatever works for you.

With the June 2019 publication of Clause & Effect, Kathy Lynn Emerson/Kaitlyn Dunnett will have had sixty books traditionally published. She won the Agatha Award and was an Anthony and Macavity finalist for best mystery nonfiction of 2008 for How to Write Killer Historical Mysteries and was an Agatha Award finalist in 2015 in the best mystery short story category. She was the Malice Domestic Guest of Honor in 2014. Currently she writes the contemporary Liss MacCrimmon Mysteries and the “Deadly Edits” series as Kaitlyn. As Kathy, her most recent book is a collection of short stories, Different Times, Different Crimes. Her websites are www.KaitlynDunnett.com and www.KathyLynnEmerson.com and she maintains a website about women who lived in England between 1485 and 1603 at A Who’s Who of Tudor Women.