I’m so happy to introduce Vivien Chien to our readers! Vivien writes the wonderful Noodle Shop Mystery series. The fourth book, Wonton Terror, released on August 27. Here’s a little about the book: 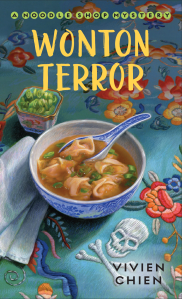 In the fourth in Vivien Chien’s Noodle Shop delicious mystery series, Ho-Lee Noodle House is ready to take the Cleveland night market by storm—until a brand-new food venue literally explodes onto the scene.

Lana Lee is all smiles when the first evening of Cleveland’s Asian Night Market kicks off the summer. The weekly festival is always good for business, packed with locals and tourists, and this year, some stiff new food-truck competition. Wonton on Wheels, run by old friends of Lana’s parents, promises to have customers lining up for their delicately wrapped delights—until the truck blows up at evening’s end.

Lana’s boyfriend, Detective Adam Trudeau, had been planning a birthday getaway for the two of them but, lo and behold, Lana must assume the role of amateur sleuth yet again. With one proprietor of Wonton on Wheels dead, it’s beginning to look more like murder and less like an unfortunate accident. And as they begin to unwrap layers of disturbing secrets, Lana’s own family erupts into new drama. Will Lana be able to solve this crime—or has she jumped from the wok right into the fire?

Vivien: Joseph Campbell, professor and storyteller, is well-known for saying, “We must let go of the life we have planned, so as to accept the one that is waiting for us.” I often consider this ideology myself and incorporate it into my Noodle Shop mysteries, especially where my amateur sleuth, Lana Lee, is concerned. The greatest challenge, I believe, especially in your twenties as you’re beginning to transition into self-sufficiency, is usually adversity. Depending on the situation, it can be a struggle to handle things gracefully and maybe even difficult to find something positive that comes from it.

In the first book of the series, Death by Dumpling, we meet Lana Lee at a shaky part in her late twenties—twenty-seven to be exact—and life has taken a turn she was clearly not expecting. In her mind, she had previously assumed a fanciful life with successful romances, a top-notch office job that afforded her a means to a glamourous wardrobe, and a cushy lifestyle of peaches and sunshine. But, alas, rude awakenings are no one’s friend and we often learn early on that things don’t always go as we originally imagined.

With each book in the series, I enjoy exploring this concept in different ways and developing Lana’s personality further with the adversities she has to overcome on a daily basis. Of course, handling murder investigations is a large part of that, but I also like to delve into the more intimate aspects of life, like career aspirations, relationships, and personal development into mindset and character traits. She is often humbled and learns more compassionate ways of dealing with things as she attempts to see both sides of a situation. And, I’ll also try finding ways to make the mystery or outside events with others relatable to her current life as well.

Though in the beginning of the series she is reluctant to take a different path, she slowly begins to find that she enjoys it more than she’d assumed and comes to the realization that life is what we make of it. As the series continues, I hope to engage Lana and the other characters in diverse challenges that make them consider thinking outside of their usual mental boxes and opening themselves to new roadmaps of life they may have not previously considered as part of “the plan.”

So, how about you, fellow mystery lovers? How important do you find mindset to be when dealing with adversity – do you fight against the grain or go with the flow?

(In case you were wondering, I myself have always been a grain fighter, but in recent times, I’ve been practicing riding the waves.)

Author Bio: Vivien Chien was born and raised in Cleveland, Ohio where she grew up in a mixed-race home, making for some very interesting cultural experiences. Her most recent release, Wonton Terror, is the fourth installment in the Noodle Shop mysteries. She is currently working on the sixth book, Kung Pao Killer.