Donamae Kutska is the winner of a copy of Here Comes the Body! Watch for an email from Ellen!

Sherry here, delighted to host Ellen Byron who is writing her wonderful new series as Maria DiRico. Look for a giveaway at the end of the post. Here Comes the Body is the first book in her new Catering Hall Mystery series. I was lucky enough to read an early version! Here’s a bit about the book: After

her philandering husband’s boat went down, newly single Mia Carina went back to Astoria, the bustling Queens neighborhood of her youth. Living with her nonna and her oversized cat, Doorstop, she’s got a whole new life—including some amateur sleuthing . . .
Mia is starting work at Belle View, her father’s catering hall, a popular spot for weddings, office parties, and more—despite the planes that occasionally roar overhead on their way to LaGuardia and rattle the crystal chandelier. Soon she’s planning a bachelor party for a less-than-gentlemanly groom. But it goes awry when the gigantic cake is wheeled in and a deadly surprise is revealed . . .
Since some of her family’s associates are on the shady side, the NYPD wastes no time in casting suspicion on Mia’s father. Now, Mia’s going to have to use all her street smarts to keep him out of Rikers Island . . .

FROM A SMALL ITALIAN VILLAGE…

In the shadow of Italy’s majestic Abruzzo mountains sits a small village called Orsogna. It’s where my mother was born, and her family lived for countless generations prior. 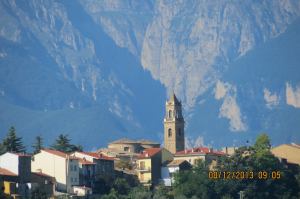 I’ve yet to visit Orsogna. I know it only through photos, and stories shared by the steady stream of Orsognese who left the village and immigrated to America. From my grandmother, who was born in 1906 and didn’t come to this country until 1930, I know it was a hard life. I once asked Nonna what she did as a young girl in Orsogna and she said in her broken English, “We pick up lu sticks.” (“Lu” was her dialectical way of saying the pure Italian masculine and feminine plurals “i” and “le.”) What she meant was that she spent a lot of time gathering sticks to feed the fires that provided heat for cooking and warmed the village’s stone homes. Nonna also told me her family kept animals “in the basement,” by which she meant the ground floor. I asked her why. She shrugged and said, “Meh, where you gonna keep them? In the kitchen?”

The Orsognese who didn’t leave Italy before World War II endured bombings and depravation. Many left the village and sheltered in nearby caves. Some died, killed by landmines on forages for food to feed their families. But by the 1960s, pretty much all of my mother’s extended family had made it to New York, settling in Queens. My childhood memories are often set in the basement of a two-family house in Astoria, a thick cloud of cigarette smoke hovering below the ceiling as the men drank wine and argued in Italian while the women deposited giant bowls of homemade pasta and meatballs on a long table covered with an oil cloth. Other memories are set in the churches where family christenings, communions, weddings, and funerals took place, followed by grand – or somber – parties at Astoria Manor or the Grand Bay marine, the banquet halls that two cousins managed.

My new Catering Hall Mystery series is inspired by the nonnas, nonnos, zia’s, zio’s, cugini, and cugine who made such an impression on me as a child. When I write, I’m taking the walk down Ditmars Boulevard from the subway to my nonna’s house. I’m dancing in a gaudy Astoria Manor banquet room. I’m watching boats bob at the docks behind the Grand Bay Marina. And I’m saying a prayer of thanks to a small village in the shadow of large mountains that beget some of the most wonderful people I will ever be lucky enough to know.

Readers: How has your family or a friend inspired you? Or just say hi! Ellen is giving away a copy of Here Comes the Body to someone who leaves a comment! BIO: Maria DiRico is the pen name of mystery author Ellen Byron. She is first-generation Italian American on her mother’s side. While growing up in Queens, Maria/Ellen’s cousins ran the Astoria Manor and Grand Bay Marina catering halls. MARDI GRAS MURDER, the fourth book in Ellen’s bestselling Cajun Country Mystery series, won the 2018 Agatha Award for Best Contemporary Novel. The series has also won multiple Best Humorous Mystery Lefty awards. Fun fact: she worked as cater-waiter for Martha Stewart, a credit she never tires of sharing. Maria/Ellen loves to translate what she learned from Martha into recipes for her books. You can reach her at:

HERE COMES THE BODY is available at your local bookstore, as well at https://www.amazon.com/Here-Comes-Body-Catering-Mystery-ebook/dp/B07R8WYLSC/ref=sr_1_1?keywords=here+comes+the+body&qid=1579493893&sr=8-1