I hope you all get to meet Catherine some day because she is delightful just like her books. And there’s a chance to win one at the end of the post!

People often ask me if my characters are based on real people. For the most part, no. One exception is Domenic Muccio in my Cookies & Chance series. Book #9, Icing on the Casket, released last week and features his daughter, protagonist Sally (Sal) Muccio Donovan, who owns a novelty cookie shop in Western New York. Sally’s Samples gives out free, homemade fortune cookies with every purchase. The ominous messages inside often forewarn of a disaster or murder in the making that she will eventually stumble upon.

In Icing on the Casket, Dom asks his daughter for help when he finds his friend, a local mortician, dead in one of his caskets. Dom is loosely based on my own father who passed away 20 years ago. Both men were born in Sicily, loved their families and were blue collar workers. Dom is retired from the railroad while my father started his own auto body repair shop in Albany back in 1939, and I’m proud to say that it’s still going strong to this day.

Dom, however, is a bit of an odd duck. He keeps a coffin in his house for naps, goes to wakes for fun and writes a daily post on the subject of death. His blog even has followers. Okay, not as many as The Wickeds, but he can dream, right?

Like Dom, my father was old school and proud of it. He also attended several wakes, sometimes one or two a week. As a child, I didn’t understand why he went to so many and thought they were creepy. I remember overhearing my mother once tell him, “You didn’t even know that man.” To which my father replied, “It’s a matter of respect.”

Respect is a big deal in most, if not all Italian families. Growing up, some of my father’s favorite sayings included, “Respect your elders,” “Respect the dead,” and “Respect is key.” Then there’s my all-time favorite, “Show some respect.”

My mother had her own share of preferred clichés such as, “If your friend jumped off a cliff, would you?” or, “One day your face is going to freeze that way.” I used to roll my eyes at those phrases…when she couldn’t see me, of course. But last week, one of my sons told me that he was staying up all night to finish a paper for his college course. My response? “Don’t burn the candle at both ends.”

Yes, he gave me a funny look. I too was amazed when the words tumbled out of my mouth. That was the moment when I realized that I had officially become my parents.

Readers: What were some of your parents’ or grandparents’ favorite sayings? Leave a comment for a chance to win a signed copy of any book in the Cookies & Chance series. U.S. delivery only.

About Icing on the Casket:

Full-time baker and sometime sleuth Sally Muccio finally has everything she’s always wanted—a beautiful baby, loving husband, and a thriving business. Now that she’s a mother, Sal has vowed she’ll stay out of future murder investigations. But when her eccentric father’s friend, mortician Eddie Phibbins, is found dead in one of his own caskets, Sal’s father begs her to help find the killer.

With their famous coffins cookies in hand, Sal and her best friend Josie “undertake” the process of questioning mourners and employees at the funeral home, hoping for a lead to Eddie’s killer. Between a recently fired hearse driver, resentful family members and a wacky, love-struck makeup artist there’s no shortage of suspects. Once again, Sal’s snooping has attracted the attention of a killer, and her good intentions may have only succeeded in digging herself an early grave… 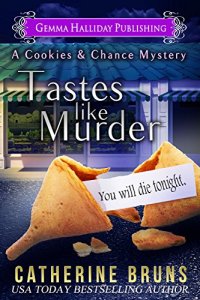 The first book in the Cookies & Chance series, Tastes Like Murder, is on sale for only 99 cents this week! http://amzn.to/2zVeQyq