Catherine Larklund is the winner of Leslie’s book. Watch for an email from Leslie!

I’m happy to welcome back Leslie Budewitz. She’s a multi-published author. a fellow past president of Sisters in Crime, and a lovely human being. The paperback version of the fifth book in her Spice Shop mystery series, The Solace of Bay Leaves, comes out on October 20, 2020. Look for a giveaway at the end of the post!

Leslie: When I was researching Assault & Pepper, the first Spice Shop mystery, I took a trip to Seattle and my BFF and I spent the day prowling the Pike Place Market, where the series is set. We stopped for coffee at Ghost Alley Espresso, http://ghostalleyespresso.com/ a hole-in-the-wall that neither of us remembered. I told the owner what I was up to. Turned out she was a child of the Market, whose parents had started a business selling her mother’s watercolors, cards, and calendars. (Called Studio Solstone, it’s still there. http://www.seattlewatercolors.com/ And the BFF sends me their calendars; you can see the espresso shop in the lower middle.) 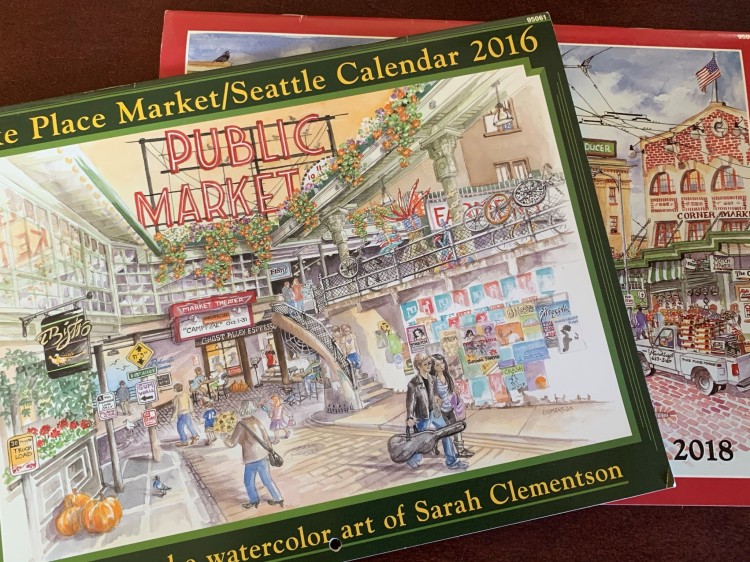 Our new friend wanted a storefront as home base for her business giving ghost tours of the city, including the Market. Her tiny shop under the stairs, on the way to the Market Theater and the Gum Wall, had originally been intended as a rest stop for drivers and delivery men, then became forgotten storage. Only because she grew up knowing the Market inside out did she realize it could be useable space. Convincing the agencies that run the Market was another matter, and she used her own story to illustrate the process of setting up a business in the Market and leasing space. Literally—she took over my notebook and sketched out the organizational structure. 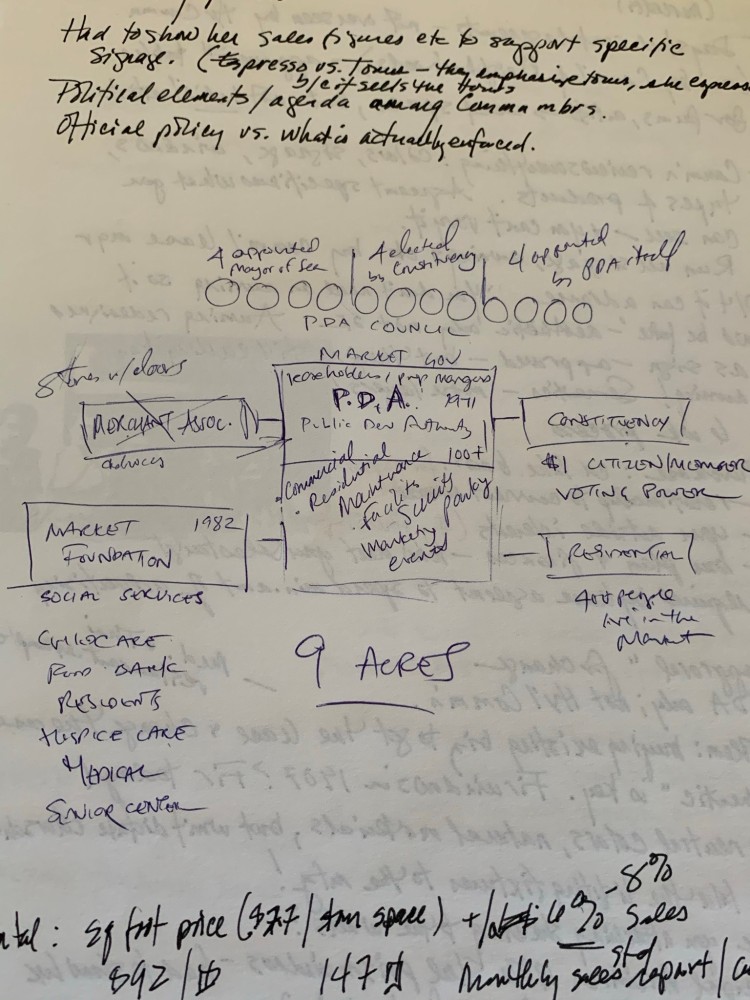 Most useful cup of coffee I ever had.

(In truth, I don’t think she actually charged us for the coffee, but I bought several books from her, including her book, Market Ghost Stories, and I sent her a signed copy of Assault & Pepper.)

That conversation fed me details about running a Market business that have worked their way into the Spice Shop series—the role of the Public Development Authority and the Historic Commission, the hoops Pepper jumps through to get permission for a new sign in Guilty as Cinnamon, the basement storage units where she finds clues in Killing Thyme.

It also gave me the ghost theme.

I’m not talking your ordinary ghosts. Instead, I’ve explored the history of the Market through its ghost stories, fueled by its history and higgledy-piggledy construction. (One book does involve an actual–maybe ghost—I won’t spoil the series for new readers by saying which one.) I’ve played with ways the word “ghost” shows up in our language: “ghosting” in relationships; ghost traps, a sad fact of the fishing life; and in The Solace of Bay Leaves (out October 20, from Seventh St. Books), ghost signs.

You know ghost signs, don’t you? Faded advertising signs painted on the sides of old buildings, for a long-gone tenant or an unrelated product. Some are quite vivid; others, you’ve got to squint to see. Some walls boast layers of signs. Occasionally, as happened in Missoula while I was writing Solace, one will reappear when an adjacent building is torn down. I was already fascinated by ghost signs and had been hoping to work them into the series. When I read that story and saw the sign, I immediately thought it belonged in Solace, where Pepper investigates a shooting that leaves an old friend gravely injured and discovers unexpected ties to the unsolved murder of her friend Laurel’s husband.

How that ghost sign would work its way into the story, I didn’t know. Here’s a hint.

Unfortunately, I’ve never taken any photos of ghost signs in Seattle, and didn’t get a chance to travel there this summer, as I’d hoped. These photos are from downtown Kalispell, Montana, the nearest “big town” to me. (Readers of my Food Lovers’ Village Mysteries know it as Pondera.)

Readers, any ghost signs in your town? A favorite old building you’ve heard is haunted? Talk to Leslie in the comments for a chance to win a signed copy (US only) ot The Solace of Bay Leaves.

From the cover of The Solace of Bay Leaves, the 5th Spice Shop Mystery by Leslie Budewitz (Seventh St. Books, July/October 2020, in paperback, ebook, and audio).

But when her life fell apart at forty and she bought the venerable-but-rundown Spice Shop in Seattle’s Pike Place Market, her days took a tasty turn. Now she’s savoring the prospect of a flavorful fall and a busy holiday cooking season, until danger bubbles to the surface …

Between managing her shop, worrying about her staff, and navigating a delicious new relationship, Pepper’s firing on all burners. But when her childhood friend Maddie is shot and gravely wounded, the incident is quickly tied to an unsolved murder that left another close friend a widow.

Convinced that the secret to both crimes lies in the history of a once-beloved building, Pepper uses her local-girl contacts and her talent for asking questions to unearth startling links between the past and present—links that suggest her childhood friend may not have been the Golden Girl she appeared to be. Pepper is forced to face her own regrets and unsavory emotions, if she wants to save Maddie’s life—and her own.

Leslie Budewitz blends her passion for food, great mysteries, and the Northwest in two cozy mystery series, the Spice Shop Mysteries set in Seattle’s Pike Place Market, and the Food Lovers’ Village Mysteries, set in NW Montana. Watch for her suspense debut, Bitterroot Lake (written as Alicia Beckman) in April 2021. A three-time Agatha-Award winner (2011, Best Nonfiction; 2013, Best First Novel; 2018, Best Short Story), she is a past president of Sisters in Crime and a current board member of Mystery Writers of America. She lives and cooks in NW Montana.

Find her online at www.LeslieBudewitz.com and on Facebook at www.Facebook.com/LeslieBudewitzAuthor More about the Solace of Bay Leaves, including an excerpt and buy links here: http://www.lesliebudewitz.com/spice-shop-mystery-series/

This site uses Akismet to reduce spam. Learn how your comment data is processed.