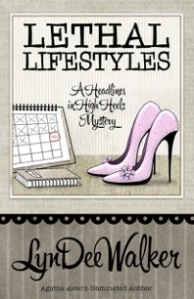 We are so happy to welcome back LynDee Walker, the Agatha Award nominated author of the Headlines in High Heels Mysteries. The sixth book in the series Lethal Lifestyles came out in September 2016!

Lyndee is giving away a copy (paperback or ebook) of Front Page Fatality – the first book in the series to someone who leaves a comment!

Here are some of LynDee’s experiences at book signings:

Hey, fabulous writer friend, congratulations are in order: your book birthday is finally here! This calls for a celebration—and what better way to celebrate a new book than a bookstore signing party?

But but but…signings are scary! People! Sales! Pressure! What if it bombs? Or what if it doesn’t (especially if you write about fictional people because real ones make you want to run screaming for a safe room)?

Here’s a secret from six books deep in these trenches: nobody ever really knows what to expect from a signing (okay, I bet Stephen King and J.K. Rowling haven’t wondered if anybody will show up in a pretty long time. I also bet neither of them is reading this, so if you are, take heart), and there’s fun to be found in every book event.

Another secret: it’s always a crapshoot. You can prepare for a signing at the same store on the same Saturday of the year the exact same way, and you’ll speak to a standing-room-only-all-the-way-to-the-back-of-the-shop packed house the first time, while the second, balloons and cookies will only manage to grab the attention of three people in two hours (one of them might actually buy a book, too).

In this relatively solitary pursuit, it’s easy to let that second scenario punch a double-wide hole in your self-confidence. Take it from someone who’s been there: it’s not personal. It’s not a reflection of your talent. And the very next signing you do could be a blowout.

Let’s take samples from the events I’ve done in the past four years, shall we? 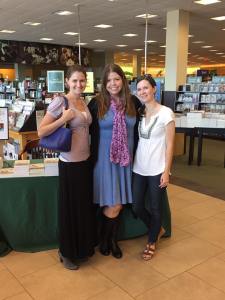 My debut’s launch party set my personal bar pretty doggone high: we had it at the most adorable bookshop, in a part of Richmond that featured prominently in the book, on a Saturday in February. I fretted for weeks over traffic and parking. I watched forecast models like I’d suddenly been hired by channel 8’s storm team. Tuesday that week it was sunny and 70 degrees. Yes, in Virginia in February. Saturday morning it was gray and frigid with ice pelting anyone who stepped outside.

“That’s it,” I told my husband. “This is over before it starts. Who’s fighting Shockoe Slip traffic in this mess?” (And I’m an optimist, y’all.)

Pretty much everyone, it turned out. I am blessed with a wide circle of friends, and they turned out en masse—plus, the first two rows of chairs were full of people I’d never set eyes on who just came to hear about the book. The store was packed from stem to stern, we sold a bajillion books (well…more than 50), and I signed stuff until my hand cramped. Fabulous day.

In 2015 when my fifth book launched, I put all the same care and planning and broadcasting and inviting into a launch at my local (awesome) Barnes and Noble. The manager had signs all over the shop for weeks, I was on TV talking it up, and I was pumped.

The day before the event I got frantic call from the store: the books had been ordered but had not shipped.

How the heck do you have a book signing with no books? I grabbed the five copies I’d gotten from the publisher in the mail a couple days before and went to the store hoping for the best.

The cool spin on this news: we sold out of books!

The not as cool honest truth: I sat at the table for two hours and sold exactly those five books. There was never anything that could be called a line. Every single cookie was eaten by a child who walked up and said “can I have one?” while their parent stood far enough back that they didn’t have to talk to me. BUT. One woman drove almost 100 miles round trip to get me to sign her book. See? There’s always something fun.

Like that time I went to sign books at Bouchercon only to find myself right next to Charles Todd. The only time it could possibly make anyone feel self-conscious that there are ten people in line to get their autograph is when there are a hundred in the next line over. BUT. Charles and Caroline were lovely people (most book people are), and he leaned over at one point and whispered “you’re new. You’ll get there.”

The books (big stacks of all six titles) arrived a week in advance. Everything was set and ready. I worried that we’d only sell three this time and they’d never ask me back.

I ran into the store right at two (small child emergency on my way out the door, naturally) and plopped into the chair. By the time I sat up from bending to pull pens from my bag and tuck it under the table there was a line the likes of which I hadn’t seen since…maybe ever. It took almost two hours to get to everyone (full disclosure: I did chat with anyone who wanted to chat, because that’s my favorite part of this gig. I’m that woman who makes new friends in the grocery store checkout line). And while a few of my girlfriends were there, by the time you’re on book six, this whole “LynDee wrote a(nother) book” thing is old hat to your circle and they have their own stuff to do and will download it to their iPhone later, thankyouverymuchandcongratulations. Most of these people didn’t know me for anything but my work. And that was pretty darned fun, right there. I kept glancing to the back of the line to smile a “please don’t leave,” at whoever was last.

At the end of the day we’d sold out of four of the six titles, the store manager was beside himself, one of my readers had brought me (amazing) home-baked pink high heel cookies, and my face hurt from smiling.

I had no idea when I left for the event that it would go that well. And I have no expectation that my next one will do the same (but I can hope).

So readers, know that we love you even more when you drop into events to say hello, and writers, walk in with your pen ready, your smile bright, and your best “I got this” attitude. Whether there are two people or two hundred, something fun will happen. Pinky swear.

Readers: Have you been to a fun book signing? And authors have you had a good/bad experience you want to share?

The newest book in the series, LETHAL LIFESTYLES, was published on September 27, 2016.Before she started writing mysteries, LynDee was an award-winning journalist. Her work has appeared in newspapers and magazines across the U.S. She adores her family, her readers, and enchiladas. She often works out tricky plot points while walking off the enchiladas. She lives in Richmond, Virginia, where she is either playing with her children, working on her next novel, or admiring beautiful shoes she can’t wear.