The Agatha Awards, given at Malice Domestic, honor the “traditional mystery,” and this year’s nominated novels span the length and breadth of the category–from cozy to edgy, amateur sleuth and professional, female protagonist and male, series mystery and standalone. I’m excited to be on this list with some of my favorite authors.

Here’s our question for the nominees: Did you know at the outset that your main character was strong enough to carry a book/series? How did this character change as you got to know him or her better?

Ellen Byron: I didn’t know for sure if my protagonist could carry a series, but I knew she had to. I was too in love with the fictional world of Pelican, Louisiana – and the real world of Cajun Country – to stop writing about it after one book. What I find exciting is how I’m always discovering new things about Maggie Crozat. A friend who was trying to wrap her head around the amateur sleuth angle of my series once asked me, “Does she see things other people miss because she’s an artist and very visual?” To which I replied, “She does now!”

I’m currently working on the fourth Cajun Country Mystery, and Maggie just shared she’s an only child, and was lonely growing up. This came as news to me because originally I gave her a brother, but then put him on the back burner because he didn’t contribute to the story. I always thought he’d come back someday, but Maggie has spoken. She’s declared herself sibling-free. I feel so close to her that sometimes I forget she’s not real. Those are the moments when I think, “Hmm, might be time to go back to therapy.”

Catriona McPherson: Oh, I wish this was a series! I miss them all now that the book’s done, even though it took me a while to get to know Jude – my heroine – well enough to write about her with confidence. I knew she was a librarian and she lived in London, but I wrote and wrote and couldn’t get the essence of her. She was flat, while all the other characters came to joyous life around her.

Then one day I was writing a scene in the dusty, disordered bookshop where the story takes place and the thought of all the dirt and mouse-droppings and dust-mites was making me feel itchy. Suddenly, I got that tingly feeling (different from the itching) and I knew that Jude was a cataloguer who’d given up working on the desk with the general public because she’s a germaphobe and the way people treat library books distresses her too much. I used to work in a public library and I know this from bitter experience. Worst bookmark I ever found in a returned book? Bacon rind. Anyway, germaphobe Jude came instantly alive and the book was plain sailing after that.

But it’s not the start of a series. The story of Jude, Lowell the bookshop owner and the irrepressible pregnant nineteen-year-old Eddy is done. Unless I think of another one . . . 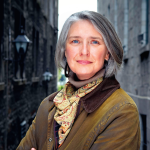 Louise Penny: Initially my main characters were going to be the artist couple, Clara and Peter Morrow.  But as I thought about it more, I could see that while strong secondary characters, making them the center, the core of the series simply would not work, for all sorts of reasons, primary that I was afraid readers, and I, would tire if they had too much of them.

The other reason was that the head of homicide seemed so fully formed when he first appeared and I realized he was the one I needed.  Gamache could hold the series together, and that would allow the secondary characters to shine without the burden of carrying the series.  But he needed to be someone whose company I would enjoy, perhaps for years.  And so I made him a man I would marry, since this is, in effect, a marriage.  As it turns out, far from creating Armand Gamache, I actually transcribed him.  Gamache is inspired by my husband, Michael. 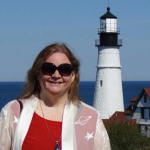 Barbara Ross: When I go back now and look at the original proposal for the Maine Clambake Mysteries, it’s amazing to me how much of Julia Snowden was there. Her family was there–her mother, sister, pain-in-the-neck brother-in-law, and niece were there, as was the still acutely felt absence of her late father. Her parents’ unusual marriage between a summer person who lived on a private island and the boy who delivered their groceries in his skiff was there, too.

This last was particularly important to me, because I am not and would never claim to be a native Mainer, so I needed to be able to write with the perspective of someone on the outside looking in. In her view, her parent’s marriage has left Julia forever on the outside, belonging to neither tribe in her resort town. (Her sister Livvie, on the other hand, doesn’t feel that way at all. Which is something that fascinates me, how people can be brought up by the same parents at more or less the same time, yet experience their circumstances utterly differently.)

But there was huge thing I didn’t know at the beginning–how Julia would act and react when put in a series of extraordinary situations. While I had a sense of her character, there was no way to know until those scenes were written. In that sense she continuously reveals herself to me.

Hank Phillippi Ryan: That is such a great question, because it made me examine my choices, and realize I hadn’t asked myself that question at all.

When I began the Jane Ryland books with The Other Woman, that started with a plot. And forgive me, here is a tiny bit of backstory: I had been reading about Governor Mark Sanford, who told his wife and constituents that he was “hiking the Appalachian Trail “when he was actually off with his mistress. And I started thinking about why anyone would be the other woman. It’s so destructive in every way. So someone was quoted as saying “You can choose your sin, but you cannot choose your consequences.”

And I thought: that’s my book.

So I needed a main character to tell that story. And it couldn’t be my first series character, Charlotte McNally, because the story was too big and textured for first person.
But I knew she would be a reporter, a tough, strong, curious, honorable, caring reporter.
And a reporter’s life is all about the search for the next big story. That is natural! So once I decided on “reporter,” it never crossed my mind that she wouldn’t be able to handle it.

But the fabulous part is how she came to life! Jane Ryland is 33-ish, when the book starts, so 64 year-old me, at the time, could not really draw on my experiences at that age, since that was a million years ago. That made me channel her through a different time…how that age would behave now. And I love how she showed up on the page! Confident, and not self-centered, and a little fearless when it comes to asking questions. Sometimes I am too worried about what other people think, and I was delighted to say she is somehow less timid than I am.

Yes, I know I wrote it, but you can’t MAKE a character do something they wouldn’t do. That’s when I know the plot is driving the story, not the character. Jane lets me know when I am doing that—it comes across awkward and “written.” And I think, oh, that’s Hank, not Jane. So when I am lucky, Jane reveals herself to me on the page, and I am so proud of her in SAY NO MORE. (Well, eventually.)

Readers: What do you look for in a character to carry you through a book–or series?

Ellen, Catriona, Hank and I will be at Malice at end of this month. If you’ll be there, we’d love to have you attend our panel, “Simply the Best: Agatha Best Contemporary Novel Nominees,” moderated by Shawn Reilly Simmons on Friday at 1:00 pm. (Or honestly, come talk to any one of us at any time.) Louise, we’ll all be thinking of you!