A couple of weeks ago I helped author Donna Andrews with a yard sale. It gave me a chance to put my money (or Donna’s in this case) where my protagonist Sarah Winston’s mouth is. Garage sales are a lot of work and in this case Donna had things from her grandparents and parents along with things of her own to sale. The picture below is while we were setting up. You can read Donna’s take on the event here! 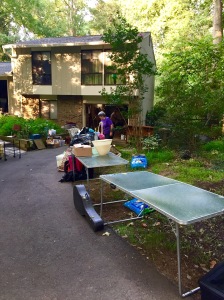 We got together a few days before the sale to price. Donna had already arranged a lot of like items together in her garage. There was so much stuff we decided not to individually price things (even though Sarah usually does). Donna made signs for things like albums $1.00, glassware $2.00, etc.

Vintage Jewelry Donna also had a lot of vintage jewelry. We used box lids with towels in them to arrange the jewelry. A friend of Donna’s who sells jewelry had been over to take a look at things to make sure nothing was too valuable. As we arranged the jewelry I would flip it over to look for signatures. Also to see if there was backing on the jewelry – that is usually a sign there aren’t gemstones set in the piece. I took some of the pieces home to check prices on eBay. Below is an example of the backing from a brooch I bought last spring at a sale: 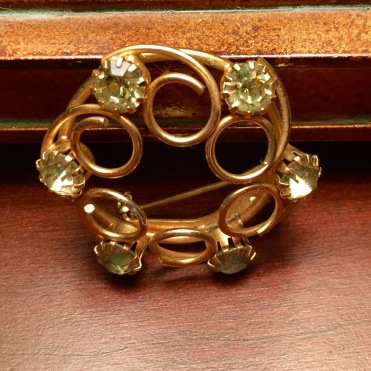 Open! The weather the day of the sale was perfect, not too hot and a gentle breeze – almost unbelievable for August. Garage sales make for interesting people watching and become a study in human nature. Yes, we had early birds. The starting time was 9:00 but by 8:15 we were open for business. Donna did scare one woman off at 7:45 when she told her she could look around as long as she helped carry out a few boxes. 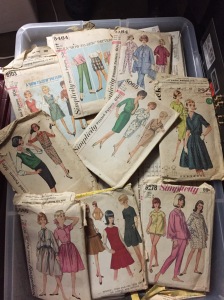 Patterns Donna had stacks of patterns from the forties, fifties, and sixties. I’d looked up prices on eBay and thought she’d probably have more luck selling them there. But we stuck them out anyway. We sold one. However, so many people stopped by to look at them. And it was lovely how many people told me stories of their moms or grandmothers making clothes. It was one of the best parts of the sale for me.

Hipsters Two young men came by who were interested in the albums Donna had for sale. She had nine boxes with everything from rock to Irish folk music to classical in them. The hipsters were interesting to watch because first they sorted through the albums in the garage setting asides ones they were interested in. Then they brought them out into the light and took the album out of its cover to look for scratches. After that they made their final decisions about which ones they wanted. At $1.00 a piece they were a great bargain. One of the guys said he loved Irish music because he could jig around the house to it. The image of this bearded hipster doing a jig still makes me laugh.

Culture clash Northern Virginia is a very diverse area but twice now I’ve seen how cultures can clash at a yard sale. A woman was looking a jewelry and had made a little stack to one side. Two other women swooped in and tried to crowd her out. They immediately went to her little stack. I intervened and explained that was spoken for. Then I

bagged it up for the first woman. Since she was still shopping I took the jewelry, put it in a box with some other things she wanted, set the box to the side and covered it.

About fifteen minutes later one of the women brought me a couple of bags full of costume jewelry and asked me how much. I was holding one of the bags and flipping it back and forth to see what all was it in. All of the sudden the woman blurted out, “It’s her bag” and points at the first woman. Then she said, “I took it from there” and points at the box where I’d set it. A confession – if only Sarah could get information so easily! I rolled my eyes and took the bag back over to its spot. 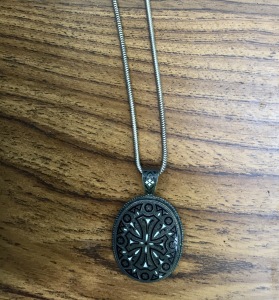 Oh, boy. So here is my confession – Sarah would be so upset – it’s the big one that almost got by me. A woman was looking at the jewelry as I was hovering nearby. She holds a necklace up and says, “This is a Victorian mourning necklace.” I take it from her, flip it over, and sure enough there is this amazing woven hair. My first (and continuing thought) is how the heck did I miss that when I was looking through the jewelry?!!!!

I told her I’d have to look up a price. On eBay similar pieces were selling from $50 to $600! And those pieces only had a swirl of hair nothing like the intricate piece I was holding. Plus I wasn’t sure Donna would even want to sell it. When Donna finished up with the person she was talking to, I took it over to her and explained the situation. Of course she didn’t want to sell it! Fortunately, the woman understood. If I hadn’t been standing right there or if she hadn’t said anything it would have been gone for a couple of dollars. Ugh, I’m still upset! 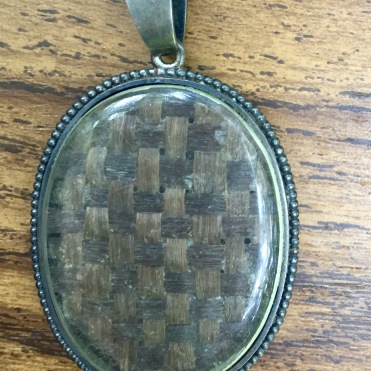 All of us go to garage sales to find a treasure for next to nothing. But that was a close one!

The End By the end of the sale, Donna had made some money and gotten rid of some things. What didn’t sale was sorted into piles to give away or sell on eBay. Garage sales are a lot of work, but you can also learn something unexpected.

Readers: What in your life has taught you something unexpected?