Edith here, still a bit high from Bouchercon. I am delighted to welcome our friend Marni Graff back to the blog. She has an awesome new Nora Tierney English Mystery out, The Golden Hour. And she’s going to give away a signed copy to one commenter here today!

Take it away, Marni.

What’s in a Name?

One of my favorite parts of starting a new book is finding and assigning names for my characters as I create them. The way a name sounds, what it means, and even how often I’ll be typing a long name are all considerations. I vary ethnicity, and often choose surnames that are from the particular area in England where my American sleuth, Nora Tierney, will visit in this particular volume. I’ve even chosen names in homage to other authors or their characters. I do seem to have a thing about names.

My own name, Marni, is a nickname that stuck after the Hitchcock movie, reduced from Marnette, and the story behind that unusual name goes like this: my grandparents had decided to name their daughter Kathleen but needed a sturdy middle name to handle their German descent surname, Loschmidt. They were stumped and asked my godmother to come up with an unusual name. Martha wanted a bit of her name in there but thought “Martha” too old-fashioned for a baby born in the 1950s. She was reading Hugo’s Les Miserables at the time, and coined the name from the lovers, Marius and Cosette. In French it translates to “little sea” but while there was not a drop of French blood in my family on either side, they liked the Irish-French-German combination of names: Kathleen Marnette Loschmidt. Of course, my mother added to the mix by marrying an Italian, so my maiden name is Marnette Kathleen Travia!

Maybe my unusual name spurred my interest in names. In my new release, The Golden Hour, I have not one but two characters named after real people, a first for me. The first came after Bouchercon Raleigh, where I offered naming rights as a literacy auction prize. The winner asked me if I would name the character for her mother, who is a huge mystery fan. This character was supposed to make an appearance, nothing of significance, but this would be the perfect gift for her mother’s 80th birthday.

Yet as I asked Betty Kaplan’s daughter, Lisa, about her mom, I found out Betty had been one of the first pediatric nurse practitioners in California, and was also such a handy woman, she was on a first name basis with the Sears repair department, known for tackling her own appliances. I started to think of a way I could use Betty in my plot, and in the final book, my Betty Kaplan has all of those attributes, but is British and lives in Bath. She’s a retired nurse practitioner who volunteers at Bath’s Royal United Hospital in their Caring Angels program. How that fits into the plot I’ll leave for readers to find out. Happy Birthday, Betty!

The second character name request came from my son, Sean, a paramedic police officer who had lost a colleague on duty after a traffic stop cost Alex Thalmann his life. Sean and Alex had been in training together, where the former Marine had been a great motivator for the entire class. His loss was felt by our entire community, and I readily agreed to Sean’s request to honor Alex in the name of all of the men and women in uniform who put their lives in danger on a daily basis for us.

This time there was no question about creating a character for the British Alex Thalmann. In The Golden Hour, he’s the Somerset and Avon Constabulary detective leading the Bath case that involves Nora and Declan and affects their little family and their future. Alex’s mom is so pleased her son has been given a huge promotion and is immortalized on those pages. It was an easy tribute to make that gave her something to smile about for a change. We’ll miss you, Alex.

Readers: Has your name ever been used in someone’s book? And for writers, how do you go about choosing your character names?

Remember, Marni is going to give away a signed copy to one commenter here today! 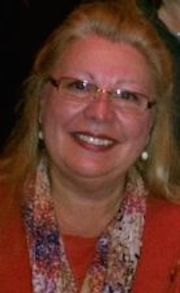 Marni Graff is the award-winning author of The Nora Tierney English Mysteries and The Trudy Genova Manhattan Mysteries. The Blue Virgin introduces . Newly published is The Golden Hour, with Nora, an American writer living in Oxford, solving crimes in Bath. Graff’s new Manhattan series, Death Unscripted, features nurse Trudy Genova, a medical consultant for a New York movie studio. Graff is also co-author of Writing in a Changing World, and writes crime book reviews at www.auntiemwrites.com. She is Managing Editor of Bridle Path Press and a member of Sisters in Crime and the NC Writers Network. All of Graff’s books are available wherever books are sold.