Thankful for Our Readers Giveaway:  For a chance to win a copy of Purring Around the Christmas Tree by Liz leave a comment below.

Regular readers know Liz Mugavero as our lead animal lover, but many of the Wickeds do have or have had pets–or other meaningful encounters with animals. Wickeds, tell us about a current or past relationship with an animal.

Edith:  I’m firmly in the cat camp, and each of our cats gets a role in one of my series. We currently have only Cristabel and Preston because my dear Birdy died last summer, the cat on the cover of every Country Store Mystery. He was a fostered kitten whom I got when he was twelve weeks old back in 2003, and he acted like a kitten for the next fourteen years. Always curious, always dashing through an open door like it was an illicit activity. I could NOT keep him off the kitchen counters. He loved to be petted, to be hoisted up to ride on a shoulder for a while, to sleep in even the tiniest of cardboard boxes. Miss you, Birdman!

Sherry: Anyone who follows me on Facebook knows Lily. I often post pictures of our morning walks. Lily is the first dog I’ve ever had. Before we got her I said I wasn’t going to be one of those people who wouldn’t take her to a kennel when we traveled and I also said she wouldn’t be allowed on the furniture. Ha! She went to a kennel once and got sick so she’s never been back. We’ve been fortunate to have friends and neighbors we could trade pet care with! And it wasn’t long before she ended up on the furniture too. She was a great antidote when our daughter was a teenager. We might all be mad at each other but we all loved Lily. I didn’t know how much I would fall in love with her. 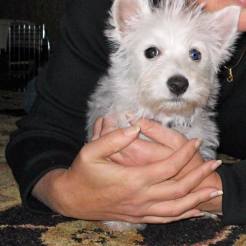 Liz: Wow, how do I pick just one? Everyone knows how much I love Shaggy, so I’ll spare you the repetition of that. Instead I’ll tell you about a really special kitty named Ferris.

Ferris was a stray who ended up at the shelter I was working at years ago in New Hampshire. He’d narrowly escaped a kill shelter, and had been living on the streets eating from garbage cans. He was prickly and fresh and I fell in love with him. He had SUCH an attitude, and major trust issues. I remember one of the first nights after he’d moved in. He still wasn’t sure how he felt about me (plus, he bit sometimes). I woke up and found him sitting inches away from me, just staring. I thought – if I move the wrong way he’s going to bite my face off! But he didn’t – and I guess after that he decided I was trustworthy. We became best buds after that. Like me, he loved potato chips and was famous for climbing inside an open bag to eat them. Which I can totally respect…I lost him in 2011 to spinal cancer, but his memory definitely lives on.

Jessie: I am sorry to have to mention it but I have allergies to both dogs and cats. Also rabbits, a great number of plants and a bunch of foods. Fortunately, I am not allergic to birds and so for many years I had the pleasure of enjoying the company of Miss Kim, an African Grey parrot with a sharp eye and a curious nature. She loved to ride around on my shoulder as I moved about the house and was always good company. She passed away about ten years ago and I still find myself calling “goodbye” to her as I about to leave the house on errands or “good night” as I mount the stairs to head for bed. 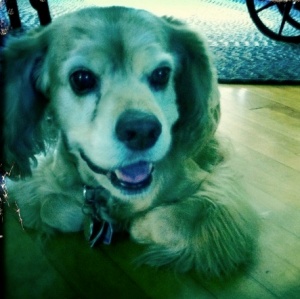 Barb: Jessie, I love the image of you calling, “good-bye,” to an empty house. I’ve had cats, but I have to say we are much more dog people. I grew up with a mutt called Tiger, a collarless puppy who followed my dad home from the park. When my kids were three and six, my sister-in-law showed up with Jessie, a mostly golden lab puppy. Years later, after she had her own children, she apologized for that little maneuver. When Jessie died, my son was a junior in high school, but my daughter was still in middle school. “Oh, Dad,” she said, batting her very thick eyelashes, “the house is so empty when I get home.” I said, “No, no, no, no. The kids will be off to college and we’ll be rushing home from work to let out a dog.” Then guess what happened? And then guess what happened? Nonetheless, we all loved MacKenzie.

Julie: Sherry came to visit last weekend, and met Fred and Ginger (and took this picture). I adopted them a year and a half ago. They were rescued from a house in Stamford CT, both have feline AIDS, and were tough to place in a home. Ginger (top of the picture) was feral. Nevertheless, and despite the fur all over the house, they are great company, get along well, and have settled in. As a matter of fact, Ginger is resting her head on my lap as I type this.

Readers: Tell us about an animal in your life–or simply say hello for a chance to win.