by Barb on a gray day in Portland, Maine

It’s been a tough week that followed a tough month that falls in a tough year. Let’s face it, it’s been tough.

Which makes me wonder why I sit at my desk and write stories-stories that by all definitions are light entertainment, intended to take people away from both their daily concerns and their existential angst.

I was having one of those moments of doubt when I happened to read a New York Times Magazine article about The Good Place, a TV show I like very much because it is both smart and intelligent, which happens to be its dichotomy, the tightrope it walks.

The article revealed, among other things, that the showrunner, Michael Schur, has this quote from David Foster Wallace in his office.

“Look, man, we’d probably most of us agree that these are dark times, and stupid ones, but do we need fiction that does nothing but dramatize how dark and stupid everything is? In dark times, the definition of good art would seem to be art that locates and applies CPR to those elements of what’s human and magical that still live and glow despite the times’ darkness.”

I try not to let Wallace’s suicide color my feelings about the words, nor the fact that I am not writing, and will never write, a 1000+ page postmodern encyclopedic novel that will be hailed as one of the great works of the last hundred years. Despite all these caveats, Wallace’s quote captures what I’m trying to do with my little books, the message that is at the heart of them.

(The quote is longer, and the article is obviously longer, and I recommend it. “The Ultimate Sitcom,” New York Times Magazine, by Sam Anderson, October 2, 2018.)

I’ve also been thinking about the words of Richard Curtis, the writer Four Weddings and a Funeral, Love Actually, About Time, Notting Hill, and so many other romantic comedies. I am an unabashed fan of these movies. The first three might be on my top ten list. Curtis has made this statement other times in slightly different ways, but I found this particular quote on YouTube from a Screenwriters Lecture he gave for the British Academy of Film and Television Arts (BAFTA) in 2014.

“I’m sometimes puzzled by the fact that when I write films about people falling in love they are critically taken to be sentimental and unrealistic. Yet, four million people in London are in love tonight and today, all around the world, hundreds of thousands of people will fall in love. But when someone writes a film about a soldier going AWOL and breaking into a flat and murdering a young pregnant woman, something that has happened twice in history, that film will be described as ‘searingly realistic.’ I don’t see how that’s true.”

This bit begins in the video at 27:06. The quote is longer and the whole video is worth a listen. Writers may particularly enjoy the writing tips he gives at the end.

And finally, below is a conversation that appeared on my Facebook wall last December, just a few days before Christmas. I have blanked out the names because it was obviously a very personal conversation. 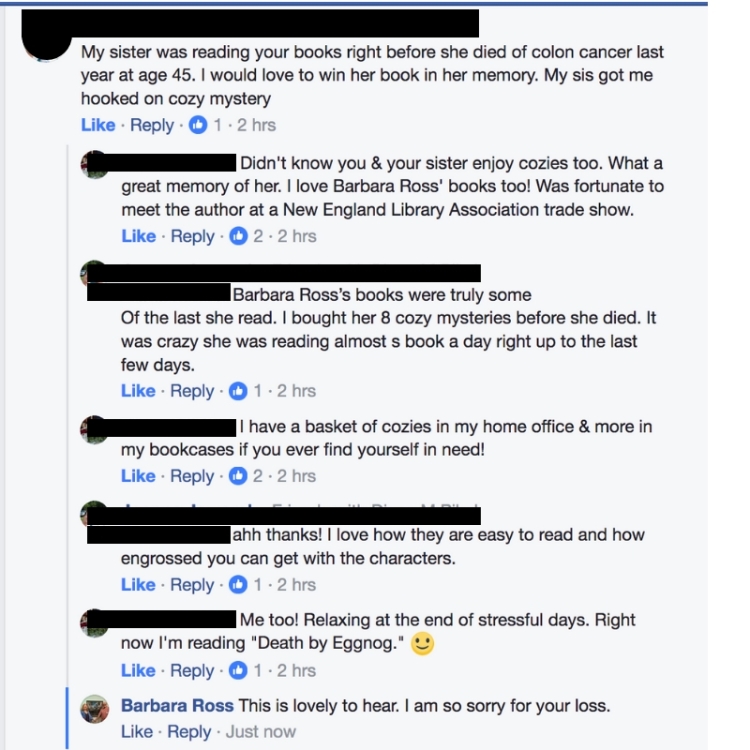 This, then, is why we do what we do. And why we need to keep doing it, even when we are disheartened and discouraged and distracted and feeling like we should do something more important. Sometimes the human thing is not to focus laser-like on what’s wrong, but to look to the good. To focus on our common humanity.

My life experience has told me that the vast amount of people I have ever met or dealt with are good. Not everyone, by any stretch, but most. They are not without travails, burdens, fears, car-sized blindspots and canyon-sized flaws. But they try, in the best ways they know how, to be good.

That goodness is what I choose to reflect in my little pieces of art.